Gender off the agenda in Australian election aftermath 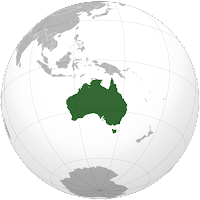 There is a website that contains all the information the rest of the world needs to know about the recent Australian election on 21 August: doesaustraliahaveagovernmentyet.com? It is a black screen with one large white word - no. Yes, we are still cheeky and irreverent. No, we no longer have a dominant two party system, and the change this is causing is painful, but hopefully good for Parliament in the long term. Yes, policy issues played out in a weird bubble during the campaign, as if the rest of the world and climate change and the financial crisis and the causes of boat arrivals of asylum-seekers simply did not exist. Most of the messages from the two major parties were negative and targeted at a few marginal seats. But we did get our youngest ever MP (at 20 years old), our first Indigenous MP, and our first Muslim MP.
The fact Australia had the chance to elect its first female Prime Minister seems not to have had much impact on the way the polls played out. At least overtly. Julia Gillard (credit for photo below right) did not s 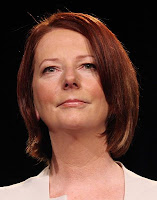 weep to power on a feminist voting landslide, that much is for sure. Research before the poll suggested that 64% of women participants would choose to vote for Gillard because they are strongly influenced by Gillard’s views and priorities first and foremost, her leadership style, second and her achievements, third, before the considerations that she is the first woman PM in Australia and that she will do more for women’s issues if elected.
Except they didn't. At least they didn't in the 20 odd marginal seats that counted. And the way that Julia Gillard took power from Kevin Rudd -- in a very sudden and clinical fashion -- was certainly a factor in the election, as was the deep unpopularity of two governments at the State level, New South Wales and Queensland, which are also led by women, Anna Bligh (credit for photo below left) and Kristina Keneally (credit for photo below right) .
Ostensibly, the election couldn't have been more stark on women's issues at the level of representation. In one corner was a feminist and the first female PM, who was famously denigra 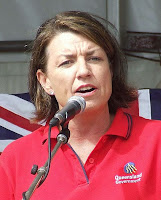 ted for being 'deliberately barren' by a fellow Parliamentarian (as best described by Kathy Lette in the UK Daily Mail). Gillard is tough and competent and resolutely cool under fire. She stated early and often that the campaign wasn't about gender, then promptly did a cover shoot for the Australian Women's Weekly.
In the other corner was Tony Abbott, an uber-masculine, fitness junkie ex-novitiate with such a negative background on women's issues that activists were able to create a full advertisement by simply cutting together his previous comments. But Abbott ran a disciplined campaign with clear messages, announced a very generous paid maternity leave scheme, and gathered his wife and daughters about him at every opportunity. Abbott also managed to curb his normal enthusiasm for gaffes about women, except for saying 'no means no' to a repeated request for Gillard to debate her on economic issues. (And he kept his clothes on - Tony Abbott is famous for getting about a in very small swimming costume, known colloquially in Australia as 'budgie smugglers'. Think Putin, but cheekier).

But in meaningful terms, there was no emphasis on any women's policy issues in the campaign whatsoever, neither at the domestic or international level (see the election platform calls from the women's sector). Admittedly there was almost no social policy or foreign policy either. The BBC always saves its best dry wit for its Australian reportage and their Sydney correspondent Nick Bryant gave the best analysis I've seen, despairing that the campaign was parochial, scrappy and lacked vision.
So here we are, many days after the election with no end in sight, and the players now are five independents in the House of Representatives, four representing rural and regional electorates. One is a very colourful character, Bob Katter - his 'Force from the North' rural rap is a big hit on YouTube. It is unlikely that women's issues are going to get much play in what is likely to be a difficult negotiation leading to a fragile minority government. It is also likely Australia might head back to the polls.
Overall? An election campaign full of sound of fury, signifying nothing? It often felt that way. Is the fact that Julia's gender did not turn the election one way or another to be celebrated? What will be the long-term impact of this election on the participation of women in public policy decision-making?
For thoughtful commentary on the role of gender in the Australian election, these opinions columns by Marian Sawer and Julia Baird are well worth a read.