Despite global warming, the Gulf Oil spill, and the high price of gasoline, Americans remain obsessed with the idea of hitting the open road. But if you've ever driven off into the sunset with young ones, you know the call to adventure can quickly dissolve into a back seat screaming match or invoke the one question guaranteed to put any parent in a straight jacket: "Are we there yet?" Nowadays, the modern parent has all sorts of sophisticated distractions--from iPods to personal DVD players--to help keep the little tykes from suffering the dreaded, automobile-induced boredom blues. But in my day (you know, back when horse-drawn carriages shared the open road :) our pleasures were more modest. License plate bingo was a great way to wile away the time as we headed out to Bear Mountain or other wild places in New York state. For the uninitiated, here is a short but sweet explanation of the game.
Driving on the California road the other day, en route to my own driving adventure, I started to think about the way in which globalization might change that childhood game of license plate bingo -- if Mexico has its way. 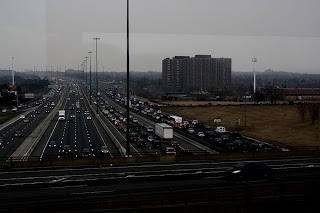 When the North American Free Trade Agreement (NAFTA) came into existence in 1994, it contained a small provision allowing trucks loaded with goods from Canada and Mexico free access to U.S. highways, provided they followed all U.S. rules and regulations -- including safety regulations. For businesses, whether Canadian, Mexican or American, this represents a healthy cost savings. No longer would time be lost transferring goods from a Mexican truck onto a U.S.-owned truck at the border; breakage would be reduced, as would time to market; and it would be easier to keep track of inventory (less opportunity for goods to "fall off a truck," for example.) The measure seemed relatively uncontroversial on its face, and indeed for Canada it was. The U.S. has for years allowed Canadian trucks onto U.S. highways. Despite the Agreement to allow Mexican trucks onto highways in states near the Mexican border by December 1995, and throughout the United States by January 2000, however, Mexican trucks have been barred.
In 2001, Mexico filed a NAFTA Chapter 20 state-to-state dispute settlement claim against the United States arguing the ban treats U.S. truckers more favorably than Mexican truckers, which violates NAFTA’s national treatment provision (Article 1202); moreover, the ban favors Canadian truckers over Mexicans, violating NAFTA's most favored nation obligation (Article 1203). The panel in In the Matter of Cross-Border Trucking Services took issue with the United States' ban because such a complete restriction did not permit those Mexican trucking companies that did meet U.S. safety regulations access to U.S. highways. In other words, all Mexican trucks and truckers were banned even if they had exemplary health and safety records. The panel concluded:

It also is clear that the was well aware during NAFTA negotiations that the Mexican truck regulatory system was deficient in many respects in the U.S. view, and that many changes would be required to improve it significantly. The and have undertaken a cooperative program aimed at improving ’s truck and driver regulatory system. While the contends that insufficient progress has been made to lift the moratorium, the obligations under [NAFTA] are not conditioned on a certain level of progress by in improving ’s truck safety regulatory system. It is unclear when, if ever, the will be satisfied that the Mexican regulatory system is adequate to lift the moratorium with respect to all Mexican providers of trucking services.

Even after losing a NAFTA case, the United States refused to implement its obligation. As late as April 2010, a bipartisan coalition of 77 House members sent a letter to U.S. Trade Rep. Ron Kirk and Transportation Secretary Ray LaHood imploring them to renegotiate the NAFTA provision allowing Mexican trucks full access to roadways. But NAFTA authorizes a winning party to take retaliatory action where a losing party refuses to conform to the terms of the agreement. Thus, Mexico has for years raised tariffs against U.S. imports to the tune of millions of dollars hurting many American farmers in the process. Just last week, Mexico raised the stakes again by increasing tariffs on such politically sensitive products as U.S. pork. And like magic, pork producers have chimed in urging the U.S. to meet its NAFTA obligations to Mexico. A spokesperson for the National Pork Producers Council had this to say about the matter:

“Mexico’s retaliation against U.S. pork will have negative economic consequences for America’s pork producers,” said NPPC President Sam Carney, a producer from Adair, Iowa. “We are extremely disappointed that our top volume export market has taken this action, but we’re more disappointed that the United States is not living up to its trade obligations.”

What's so fascinating about this cat-and-mouse play between the U.S. and Mexico is the way in which it has changed the terms of the game. The United States may be considerably more wealthy and powerful than Mexico, but NAFTA offers up an opportunity to level the playing field in some way. Mexico is savvy enough to pit one group of U.S. stakeholders against another (on the other side of the controversy are The Teamsters who would lose out on well-paying jobs if their truckers were displaced by Mexicans). With mid-term elections fast approaching, the Mexican trucking crisis takes on political overtones. Given Obama's strong emphasis on export-led growth to leverage the United States out of the recession, taking a hit on a major export commodity will hurt. Or perhaps we'll begin to see some movement on this intractable issue.
And maybe even the venerable old game of license plate bingo will have to change to accommodate Mexican trucks.

by Marjorie Florestal at 8:39 AM