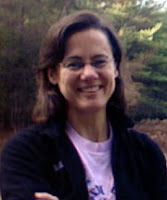 It's IntLawGrrls' great pleasure to welcome Dr. Betsy Baker (left) as today's guest blogger.
Betsy is an Associate Professor and Senior Fellow for Oceans and Energy, at the Institute for Energy and the Environment of Vermont Law School, home institution of IntLawGrrl Stephanie Farrior. Betsy teaches in the comparative law and international organizations curriculum, with emphasis on her area of special expertise -- the environment, law of the sea, and the Arctic. She served as a 2009-2010 Research Fellow at Dartmouth College's Dickey Center for International Understanding and Institute of Arctic Studies. She's also been a member of the science crew of the Healy, the U.S. Coast Guard's newest polar icebreaker, on deployments for State Department-sponsored mapping of the United States' Extended Continental Shelf in the Arctic Ocean. Betsy operates her own blog, entitled Arctic Mapping and the Law of the Sea.
She earned doctoral and master of laws degrees from Christian-Albrechts-Universität zu Kiel; while in Germany, she worked as legal historian at the Heidelberg Academy of Sciences and was affiliated with the Max Planck Institute for Comparative Public Law and International Law. Betsy, who clerked for Judge John T. Noonan, Jr., U.S. Court of Appeals for the Ninth Circuit, also holds a J.D. from the University of Michigan and B.A. from Northwestern University. She was a Lecturer on Law and Assistant Dean for the Graduate Program and International Legal Studies at Harvard Law School before joining Vermont's faculty in 2007.
In addition to these SSRN-posted publications, Betsy's scholarship includes examinations of proposals for Canadian-US cooperation in maritime issues and the law-science interface in environmental treaties and legislation. In her guest post below, she considers the newly announced U.S. ocean policy in light both of international law and the oil spill off the Gulf of Mexico.
Heartfelt welcome!
by Diane Marie Amann at 6:45 AM