International lawyers measure change over the course of human events, believing we might even shape both the change and the events. Geologists think differently.
In geologic time 65 years barely register. In international law they take us from the September 28, 1945, Proclamation on the Continental Shelf, issued by President Harry S. Truman, to the July 19, 2010, Executive Order No. 13547 on Stewardship of the Ocean, Our Coasts and the Great Lakes, issued by President Barack Obama. Delayed a few weeks by the fatal explosion and aftermath at the Deepwater Horizon oil rig in the Gulf of Mexico (prior IntLawGrrls posts), the latter order adopts a task force's recommendations, establishes a National Ocean Council, and proclaims a national ocean policy.
At long last the United States has a national ocean policy. Will it make a difference? Did the Truman Proclamation? Why consider documents of domestic executive power in a forum for international law?
For one, the Truman Proclamation memorialized this country’s once and future reliance on hydrocarbons and, for better or worse, it has shaped international law. It introduced the idea that the continental shelf

may be regarded as an extension of the land-mass of the coastal nation and thus naturally appurtenant to it,

and called for settling overlapping shelf claims by “equitable principles.” Via the 1969 judgment of the International Court of Justice in North Sea Continental Shelf, the 1945 Proclamation led negotiators to include the conept of “natural prolongation” in how to define the continental shelf under Article 76(1) of the U.N. Convention on the Law of the Sea. Geoscientists worldwide have learned to work with this legal construct and non-geologic definition of the shelf as they gather data that undergird national submissions to the Commission on the Limits of the Continental Shelf.
Other parts of the Truman Proclamation have been less influential in international law. Perhaps, post-Deepwater Horizon, their time has come.
Filtered through intervening years and changed understandings of resources (not just for exploitation any more) and their role in larger social or eco-systems, the Proclamation might be applied in powerful new ways. It states:

[S]elf-protection compels the coastal nation to keep close watch over activities off its shores which are of the nature necessary for utilization of these resources.

Yes, the focus is on utilization, and the environment goes unmentioned, but this is not surprising. It was, after all, only 1945.
If international environmental and ocean law have accomplished anything since 1945, they’ve made clear the duty of states. To quote Article 192 of the Law of the Sea Convention:

States have the obligation to protect and preserve the marine environment.

The Convention further calls for: protecting fragile ecosystems/endangered species habitats, in Article 194; contingency plans against pollution, in Article 199; and monitoring risks of pollution and assessing potential effects of activities on the marine environment, in Articles 204 and 206. Article 208 requires states to adopt rules to “prevent, reduce and control pollution of the marine environment arising from or in connection with seabed activities subject to their jurisdiction and from artificial islands, installations and structures under their jurisdiction,” which shall be “no less effective than international rules, standards and recommended practices.” As IntLawGrrl Rebecca Bratspies has posted, regulations promulgated pursuant to the United States' Outer Continental Shelf Lands Act require shutdown of offshore operations if there exists a

threat of serious, irreparable or immediate harm or damage to life ... or to the marine, coastal or human environment.

To quote the Truman Proclamation, what “activities off our shores” are necessary today for resource use in the ocean’s subsoil and seabed? What future uses should we promote? How to define “self-protection”?
In issuing his Stewardship order last month, President Obama answered these questions by embracing one big idea: coastal and marine spatial planning, defined in § 3(b) of that Executive Order as

This big idea lets stakeholders decide, region by region, what to allow off their shores. In this and other ways, the national ocean policy reflects developments in international law since the Truman Proclamation.
The Executive Order states that it is U.S. policy to “support sustainable, safe, secure and productive access to, and uses of the ocean, our coasts, and the Great Lakes” and to “exercise rights and jurisdiction and perform duties in accordance with applicable international law.” The United States is to promote this policy by “pursuing ... accession to the Law of the Sea Convention.”
The order doesn’t mention the precautionary approach. But the Final Recommendations of the Interagency Ocean Policy Task Force, which the order adopts, do. Specifically, the Recommendations list the precautionary approach as one of the “Principles” that will guide “management decisions and actions affecting the ocean” (p. 15) and planning for achieving coastal and marine spatial planning (p. 49). Principle 15 of the Rio Declaration is quoted both times, for example:

Decision-making will also be guided by a precautionary approach as reflected in the Rio Declaration of 1992, which states ... ‘[w]here there are threats of serious or irreversible damage, lack of full scientific certainty shall not be used as a reason for postponing cost-effective measures to prevent environmental degradation.’

should cooperate and provide leadership internationally in the protection, management, and sustainable use of the world’s ocean [and] coastal regions, ... in keeping with applicable conventions and agreements, and with customary international law, as reflected in the Law of the Sea Convention.

(p. 17) In implementing the policy, the new National Ocean Council is to

(p. 22) These are just some references to international law and cooperation in the national ocean policy and the Recommendations.
The United States has helped shape in the international arena some of the concepts that have in 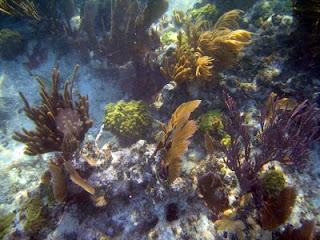 turn been adapted for national use in the new U.S ocean policy -- sustainability, coastal and marine spatial planning, large marine ecosystems, and ecosystem-based management among them. Whether that policy will shape international law in the next 65 years, to the extent the Truman Proclamation has in the last, remains to be seen.
First, we need to work on how the new policy will shape our response to the Deepwater Horizon incident.
by Betsy Baker at 5:24 AM