Just below the surface of the recent advisory opinion on Kosovo lurks an international law leviathan.
Lotus may float again.
More than 80 years ago the Permanent Court of International Justice wrote in The Case of The S.S. Lotus, named after the steamship at right (prior post):

International law governs relations between independent States. The rules of law binding upon States therefore emanate from their own free will as expressed in conventions or by usages generally accepted as expressing principles of law and established in order to regulate the relations between these co-existing independent communities or with a view to the achievement of common aims. Restrictions upon the independence of States cannot therefore be presumed. 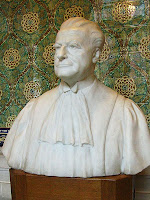 What followed from that passage is called the Lotus principle. Distilled to its essence by Lotus dissenter Bernard Cornelis Johannes Loder (right) (credit), a Judge who'd served as the PCIJ's President from 1922 to 1924, the principle is this:

[U]nder international law everything which is not prohibited is permitted.

As discussed here by Christopher Greenwood -- at that time an advocate before the PCIJ's successor, the International Court of Justice, and now a Judge on that Court -- the Lotus principle figured overtly in the ICJ's 1996 Advisory Opinion on the Legality of the Threat or Use of Nuclear Weapons. More subtle is the role that Lotus plays in the Court's most recent decision, the Advisory Opinion on Accordance with International Law of the Unilateral Declaration of Independence in Respect of Kosovo. That ICJ examination of the declaration proclaimed in Pristina on February 17, 2008 was issued on July 22. (See prior post and new ASIL Insight.)
Lotus is not cited once in the 44 pages of the principal opinion in Kosovo. Yet one hears loud Lotus soundings in Kosovo passages like these:

In no case, however, does the practice of States as a whole suggest that the act of promulgating the declaration was regarded as contrary to international law. On the contrary, State practice during this period points clearly to the conclusion that international law contained no prohibition of declarations of independence. [¶79]

Finding neither a general nor a specific international legal prohibition, the principal opinion left open space within which to act -- space that, in an unpublished analysis of U.S. counterterrorism policy, I have dubbed a "Lotus hole." (See n.114.) Combined with principles like territorial integrity and political independence -- guaranteed in Article 2(4) of the U.N. Charter -- the Lotus hole typically accords a state considerable freedom of action.
In Kosovo, however, that typical result took a curious turn.
Disputants in the 1927 Lotus case were France and Turkey, indisputably sovereign states. But the actors given freedom by the ICJ's newest ruling were not representatives of a State -- at least, the Court took pains in ¶51 to decline decision on "whether or not Kosovo has achieved statehood."

Nor did those actors comprise the Assembly of Kosovo, a body whose ultra vires actions are bound to be

annuled by a U.N. Special Representative, head of UNMIK, the U.N. Mission in Kosovo. The Court held quite to the contrary. Labeling the actors "the authors of the declaration," the Court found their action "outside that order" set up by international civil institutions. [¶105]
That the declaration affected the territorial integrity of the State of Serbia mattered not, for the reason that the persons making the declaration were not agents of a state, and, as the Court wrote in ¶80,

the scope of the principle of territorial integrity is confined to the sphere of relations between States.

The Court reasoned, in brief, that the action was not prohibited by the international law which, to quote Lotus, "governs relations between independent States," and as a matter of that same international law, the "authors" thus were free to act.[¶ 121]
Call it a Lotus hole for nonstate actors.
One might see in this topsy-turvy result an end, for good or ill, to the Westphalian system. Before jumping to that position, however, consider downsides the declaration's authors face post-Kosovo.
The very finding of nonstate status leaves open the question of what, now, Kosovo is.
► Has it "achieved statehood"?
► May Kosovo, as the authors declared it would, "undertake the international obligations of Kosovo" [¶75], engaging in external relations as do other sovereign states?
► Or is Kosovo, rather, some interim entity, a collection of people who have proclaimed the place they inhabit to be independent, yet who cannot exercise all attributes of sovereignty? 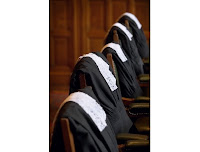 Further navigation of international politics is required for closure of holes left open by this international law judgment.
As tomorrow's post will tell, one member of the Kosovo bench (credit) lamented this Lotus-driven result.