Just finished watching Not for Ourselves Alone: The Story of Elizabeth Cady Stanton & Susan B. Anthony. The several-years-old documentary is available on Netflix as well as in DVD.
It's worth watching, though best watched in several segments. By filmmaker Ken Burns, it 1st aired as a documentary series on PBS, which maintains an informational website. As is common in works of the kind, the repetition of static photos (necessary given how little motion picture footage there was back in the day), coupled with folksy-Americana music, can make one a bit drowsy at times.
But stick with it. The story's a good one -- one of which this 'Grrl knew precious little.
Told well are the life journeys of 2 very different persons, at one in their passion for changing 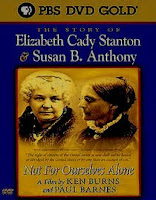 the role of women in the United States:
► Elizabeth Cady Stanton (near right), a mother, wife, and writer, loved good food and took care to keep her hair curled.
► Susan B. Anthony (far right) was an austere, cerebral woman who never married.
They met in 1851 in Seneca Falls, New York, where 3 years earlier Stanton had convened the 1st-ever women's rights convention. From then on, the 2 (both IntLawGrrls foremothers) worked tirelessly together for women's rights -- especially, for the enfranchisement of women.
Particularly interesting in Not for Ourselves are the moments when that last, singular goal conflicted with others. The conflict saw the women, who'd been staunch activists on behalf of abolition, oppose post-Civil War Reconstruction Amendments because they kept from women what they granted to former slaves. And as the goal of women's suffrage grew nearer, they distanced themselves from African American women in an effort to shore up support in the South. Conflict also arose between the 2 women themselves. The 1890s publication, by an ever-more-radical Stanton, of The Woman's Bible drew censure from the movement she'd started -- a movement that Anthony chose to continue to lead

notwithstanding its ouster of her longtime friend and ally. As a result Anthony, alone, appears on the 1st U.S. coin depicting a woman.
Both women would pass away more than a decade before their work took form in the 19th Amendment. This film serves as a reminder of their legacy.
by Diane Marie Amann at 5:15 AM