Researchers daunted by the challenge of ascertaining customary international law can rest easier. At least, that is, least if they're interested in custom related to international humanitarian law. 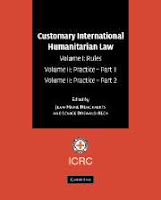 Geneva Conventions on the laws and customs of war -- marked the launch of an online version of the International Committee of the Red Cross study on Customary International Humanitarian Law that Jean-Marie Henckaerts and Louise Doswald-Beck (left) edited. The hard-copy version was published in two 2005 Cambridge University Press volumes (available here and here).
Contained in the ICRC's new, online research database are:
► Analysis of the customary rules of international humanitarian law that the Study considered applicable in international and non-international armed conflicts; and
► The sine qua non of customary international law, the practice that underlies the rules. Updated periodically thanks to a project of the British Red Cross, this section will include practice to be found in states' military manuals, legislation, case law, and official statements, and also in actions by at international conferences, by international organizations, and by judicial and quasi-judicial bodies.
by Diane Marie Amann at 4:04 AM