Not liking Lotus in Kosovo

New sighting of old law is not always a welcome event.
Take glimpses of Lotus in Kosovo, for example.
Kosovo, as detailed in yesterday's post, refers to the Advisory Opinion on Accordance with International Law of the Unilateral Declaration of Independence in Respect of Kosovo issued on July 22 at the Peace Palace (above) in The Hague, Netherlands. (photo credit)
About 7-1/2 months after the proclamation on February 17, 2008, of the Kosovo Declaration of Independence, the U.N. General Assembly asked the 15-member International Court of Justice: Is that declaration "in accordance with international law"?
"The answer to that question," the ICJ reasoned in ¶56 of its principal opinion, "turns on whether or not the applicable international law prohibited the declaration of independence." Below the surface of that phrasing, this reader caught sight of S.S. Lotus, the 1927 Permanent Court of International Justice holding that international law permits whatever it does not prohibit. Yesterday's post pointed to problems this methodology creates, and further noted that Lotus receives no citation on any of the principal opinion's 44 pages. 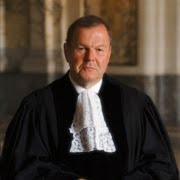 In point of fact, though the Kosovo judgment comprehends 9 additional, separate opinions, Lotus is discussed only once anywhere -- in the 3-page Declaration filed by Judge Bruno Simma (left).
Simma too saw Lotus lurking in ¶56. He did not like what he saw.
Adoption of the Lotus approach "reflects an old, tired view of international law," wrote Simma, whose many academic positions include former Law Dean at the University of Munich and current Visiting Law Professor at the University of Michigan. Simma's Declaration variously termed such reasoning "mechanical," "obsolete," "anachronistic, extremely consensualist," and "redolent of nineteenth-century positivism, with its excessively deferential approach to State consent." A onetime advocate before the Court in cases such as LaGrand, Simma lamented what he considered a missed opportunity for the ICJ "to move beyond" in Kosovo:

The Court could have considered the scope of the question from an approach which does not, in a formalistic fashion, equate the absence of a prohibition with the existence of a permissive rule; it could also have considered the possibility that international law can be neutral or deliberately silent on the international lawfulness of certain acts.

Simma imagined "a deeper analysis" of whether self-determination or remedial secession -- concepts raised in submissions during the pendency of the Kosovo case -- "permit or warrant independence (via secession) of certain peoples/territories." He continued:

[T]he Court could have delivered a more intellectually satisfying Opinion, and one with greater relevance as regards the international legal order as it has evolved into its present form, had it not interpreted the scope of the question so restrictively. To treat these questions more extensively would have demonstrated the Court's awareness of the present architecture of international law.

Forcing an act into a Lotus-like legal/illegal binary refuses to consider the act along a spectrum that includes other labels, such as "tolerated," "permissible," and "not illegal," that may be less clear yet, in Simma's view, clearly reflect the needs of present-day international law.
The future will tell whether Simma's succinct Declaration augurs something new in the ICJ, an institution whose 65-year-old Statute assumes -- as did the PCIJ in Lotus -- that international law primarily governs disputes between sovereign states, resoluble by litigation limited to states alone.