"Now is the Time:" Human Rights in the U.S. and Katrina 5 Years Later 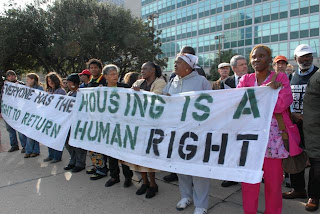 This weekend presents both a time of remembrance and an opportunity to begin again.
29 August 2010 marks 5 years since Hurricane Katrina (soon to be followed by Rita) struck the Gulf coast of the United States. That disaster, one of many that devastates millions throughout the world each year, revealed catastrophic failures of federal, state, local, and private responsibility to the poorest people in one of the most highly-resourced countries in the world. It demonstrated that life chances are not necessarily determined only by which country one lives in, but also by where one lives on the socio-economic ladder in a divided society. It is the poorest and most vulnerable who bear the brunt of governmental failures to protect or fulfill rights. They also suffer from the deliberate effects of greed, neo-liberal privatizations, corruption, racial prejudice, and violence.
A Human Rights Lens
Shortly after the storm, Jeanne Woods and I submitted a statement
to the UN on the need for international human rights scrutiny on what was essentially a man-made and continuing disaster. The UN Independent Expert on Extreme Poverty and Human Rights, Arjun Sengupta, was holding hearings in Baton Rouge, Louisiana at which survivors from all walks of life, lawyers, and human rights activists testified about Katrina's aftermath. Sengupta's report, Extreme Poverty and Human Rights: A Mission Report on the United States is available here.
That mission was to be followed by further efforts among local organizers to attract international and national attention to past, present, or potential U.S. human rights violations in the region. Reports, press releases, and official statements were issued by the following:
►the United States Human Rights Network
►Independent Expert on Minority Issues, Gay McDougall & Special Rapporteur on Adequate Housing Miloon Kothari
►the United Nations Committee on the Elimination of Racial Discrimination
►Special Rapporteur on Contemporary Forms of Racism, Racial Discrimination, Xenophobia, and Related Intolerance, Doudou Diene
►Special Rapporteur on the Right to Adequate Housing, Rachel Rolnik
Grassroots groups organized peoples’ tribunals to air continuing grievances and government failures to respond to the needs of the majority of survivors. (See here for a statement arising out of the 2007 International Tribunal on Hurricanes Katrina and Rita and here for continuing advocacy by the Katrina Information Network about post-Katrina and BP oil disaster human rights issues.) I've reflected on these human rights efforts in Race, Class, and Katrina: Human Rights and (Un)natural Disaster, in Environmental Justice in the New Millennium: Global Perspectives on Race, Ethnicity, and Human Rights (Filomina C. Steady, ed., 2009)
Linking Human Rights and Disaster
In the early days after the disaster, friends and colleagues asked “What does a storm have to do with human rights?” Certainly, international human rights standards cannot prevent, or provide a single effective response to, a storm or a massive oil gusher in the Gulf, toxic waste releases in Mossville, Louisiana, an earthquake in Haiti, or floods across Pakistan. But international legal standards recognize or impose obligations on state and non-state actors to respect, protect, and fulfill the human rights of individuals and groups before, during, and after such natural and man-made disasters. See, for example, the UN’s Guiding Principles on Internal Displacement.
Lessons Learned?
Civil and Political Rights. Katrina showed us how historical and contemporary discrimination results in racial and ethnic disparities in housing, education, and access to jobs and healthcare. We saw how minority status, internal displacement, and poverty can effectively strip individuals of their rights to vote or to participate in decision-making about rebuilding efforts. We learned that police and criminal justice systems intended to protect the security of communities can be abused or corrupted by some to turn against those same communities when an emergency occurs.
Economic and Social Rights. We saw how crucial hospitals, nursing homes, clinics, and other physical and mental health facilities are to the survival of any community. The poorest suffered the effects, not only of the disaster itself, but also the loss of medical records, regular doctors’ visits, access to medicines, and mental health care as mortality and morbidity rates rose from suicide, treatable diseases, and barriers to disability access. Rental housing was priced beyond reach, insurance claims unpaid, and viable public housing demolished. Workers’ rights to decent wages and safe working conditions were ignored in some rebuilding efforts. Even obvious lessons about the implications of environmental abuse on human and other life forms seemed to remain largely unlearned—workers were exposed to toxic construction materials and survivors to toxic FEMA trailers. Now the BP oil catastrophe has exposed clean-up workers to further contaminants.
Cultural Rights. Katrina also illustrated the importance of the right to participate in cultural life. Many focused on the city of New Orleans, influenced at one time or another by Native American traditions, the TransAtlantic slave trade, French colonialism, African-American traditions, Cajun traditions, Haitian traditions, jazz, blues, Catholicism, Mardi Gras, fisheries and seafood industries, and much more. These rich traditions were cultivated over generations and extended neighborhood and family networks that are recognized and to be protected under human rights norms.
Another Anniversary
Perhaps not coincidentally, 28 August is the anniversary of the great March on Washington for Jobs and Freedom. Rev. Dr. Martin Luther King’s “I Have A Dream” speech at the Lincoln Memorial in Washington was a historic call for the United States to make its constitutional aspirations a reality for all Americans, including African-Americans. King saw an end to poverty and the protection of economic rights as an important aspect of his dream of justice.

But we refuse to believe that the bank of justice is bankrupt. We refuse to believe that there are insufficient funds in the great vaults of opportunity of this nation. And so, we've come to cash this check, a check that will give us upon demand the riches of freedom and the security of justice. We have also come to this hallowed spot to remind America of the fierce urgency of Now. This is no time to engage in the luxury of cooling off or to take the tranquilizing drug of gradualism. …Now is the time to lift our nation from the quicksands of racial injustice to the solid rock of brotherhood. Now is the time to make justice a reality for all of God's children.

For many, the images of Hurricane Katrina were a resounding indication that King's dream, either with regard to racial equality or economic justice, had yet to be realized.
Human Rights in the United States: Under Review
On 20 August 2010, the United States released an important report on its compliance with international human rights standards. Under the UN Human Rights Council’s Universal Periodic Review (UPR) process, the U.S. will be subjected to formal human rights scrutiny on 5 November 2010. (A U.S. Department of State webpage available here provides links to the official country report, summaries of civil society consultations, and summaries of the UN process.) In preparation for this historic review, a coalition of U.S. NGOs organized by the U.S. Human Rights Network has compiled 24 reports on human rights conditions as of April 2010 available here.
Five years after Hurricane Katrina, and nearly 50 years after Dr. King's speech, a quick read of these reports indicates that there’s still a great deal yet to be learned to make the full enjoyment of human rights a reality in the U.S. At least, the U.S. has begun to recognize the importance of shining the human rights light on its actions at home as well as abroad.
by Hope Lewis at 9:25 PM