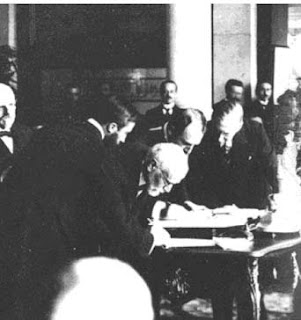 On this day in ...
... 1920 (90 years ago today), in a community outside Paris, the Treaty of Sèvres was signed by representatives of the Allied Powers who'd won World War I and of the Ottoman Empire they'd defeated. By the treaty's terms the Ottoman Empire was abolished. Turkey was to give up rights to Arab Asia and North Africa, while Armenia was to become independent and Kurdistan autonomous, and Greece was to control specified regions. (credit for photo of Greek Prime Minister Eleftherios Venizelos signing the treaty) "Rejected by the new Turkish nationalist regime, the Treaty of Sèvres was replaced by the Treaty of Lausanne," Switzerland, the 1923 pact discussed in this post.