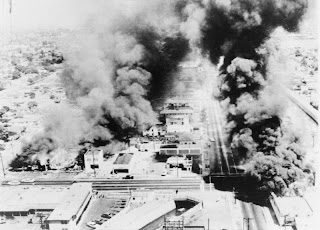 On this day in ...
... 1965 (45 years ago today), in the "deeply impoverished African American neighborhood in South Central Los Angeles" known as Watts, "the largest and costliest urban rebellion of the Civil Rights era" began when a white patrol officer arrested an African-American man on suspicion of driving while intoxicated, and violence erupted between onlookers and police. Just a day into the turmoil The New York Times reported: "Officials called it the worst racial incident in the city's history." Rioting went on for 6 days (photo credit), prompting the mobilization of 14,000 National Guard troops and imposition of a curfew over a 45-mile area. In the end, 34 persons were dead, 1,000 persons were injured, nearly 4,000 persons had been arrested, and more than $40 million worth of property was damaged. According to the Civil Rights Digital Library:

Throughout the crisis, public officials advanced the argument that the riot was the work outside agitators; however, an official investigation, prompted by Governor Pat Brown, found that the riot was a result of the Watts community's longstanding grievances and growing discontentment with high unemployment rates, substandard housing, and inadequate schools. ... [F]ollowing the riot, city leaders and state officials failed to implement measures to improve the social and economic conditions of African Americans living in the Watts neighborhood.