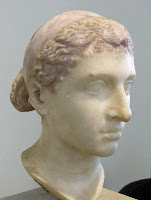 On this day in ...
... 30 B.C. (2,040 years ago today), the last head of the Ptolemaic dynasty that had ruled Egypt for the previous 2 decades, 30-something Cleopatra VII, died. Tradition -- reinforced by Shakespeare -- holds that she committed suicide by placing an asp to her breast. Recent research, however, suggests that she died from poison. Popular culture holds that her distress over the death of Roman lover Mark Anthony drove her to this measure -- but this BBC account suggests added, political reasons for her demise. (prior post) The site says of Cleopatra:

Whether she was as beautiful as was claimed, she was a highly intelligent woman and an astute politician, who brought prosperity and peace to a country that was bankrupt and split by civil war.