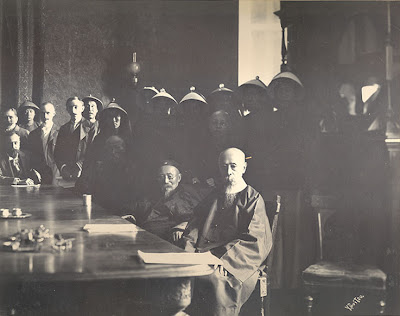 On this day in ...
... 1900 (110 years ago today), a fleet of ships containing more than 20,000 sailors and Marines from 8 countries arrived to suppress anti-foreigner violence in the Chinese capital then known as Peking. Thereafter the "forces of the Western powers and Japan in China continued to grow," and they spread across northern China after completing their occupation of the capital. The landing occurred months after the beginning of the Boxer Uprising -- which, as posted, eventually had united nationalists and troops authorized by Empress Dowager Longyu in battles against foreigners in China. The uprising would come to a full stop on September 7, 1901, when representatives of China, Japan, 9 European countries, and the United States signed the Boxer Protocol (above) in Peking. (photo credit)