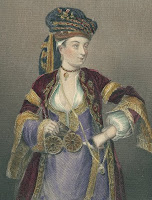 On this day in ...
... 1762, Lady Mary Wortley Montagu (left) died at age 73 in her birth city, London, a year after returning to the city on the urgings of her daughter, then wife to Britain's Prime Minister. Montagu had lived abroad much of her adult life. She'd been born into an aristocratic family, befriended a women's rights activist, Mary Astell, and eloped with Edward Montagu over her father's objection. Edward also was a member of the British elite, and while he served as Ambassador at Istanbul, she wrote the Turkish Embassy Letters for which she is best known. (image credit) Having herself been disfigured by disease, she became an expert on and advocate, through her letters, of the Turkish method of smallpox vaccination -- the only one then available.