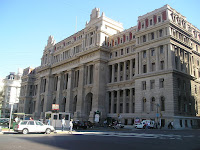 On this day in ...
... 2004, reversing a decision by the intermediate court of appeals, the Supreme Court of Argentina ruled 5-3 that statutes of limitation do not apply to charges of crimes against humanity. The ruling in Arancibia Clavel, Enrique Lautaro s/ homicidio calificado y asociación ilícita y otros arose out of an appeal of a trial court's judgment convicting an agent of DINA, the secret police that operated in Argentine and Chile during the regime of former Chilean President Augusto Pinochet, with having committed homicide by use of explosives and for participation in a criminal association. Among the instruments that the Argentinian high court (above right) cited in its ruling were the 1948 Universal Declaration of Human Rights, the 1998 Rome Statute of the International Criminal Court, and the 1968 Convention on the Non-Applicability of Statutory Limitations to War Crimes and Crimes Against Humanity. (photo credit)