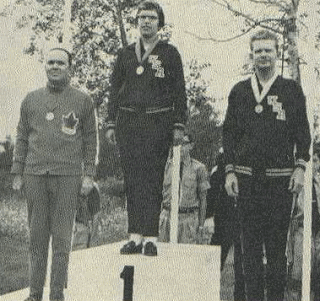 On this day in ...
... 1942, Margaret Thompson Murdock was born in Topeka, Kansas. She would become the 1st woman to compete equally with men in an Olympic sport. After graduating from Kansas State University in 1965, she joined the Women’s Army Corps -- and the Army's Marksmanship Training Unit at Fort Benning, Georgia. "[A]ffectionately known as 'The WAC' by her teammates," she soon become the 1st woman to "set an internationally recognized world record above the men’s mark – in any sport" – when she won the gold medal (right) in a smallbore shooting event at the 1967 Pan-American Games in Winnipeg, Canada. (photo credit) At her 1st Olympic Games, 9 years later in Montreal, she and a male athlete initially tied for 1st place, but on further examination of the targets he was awarded gold; even so, Murdock's Olympic silver medal was the 1st for a woman shooter. She earned a nursing degree a year later, and

became a nurse anaesthetist, in addition to being a competitive shooter,
housewife, and mother.