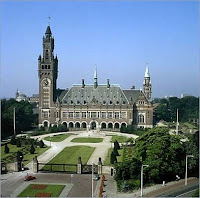 On this day in ...
... 1924, the Permanent Court of International Justice, headquartered at the Peace Palace in The Hague (right), issued its judment on jursdiction in Mavrommatis Palestine Concessions Case (Greece v. United Kingdom). One passage read:

By taking up the case of one of its subjects and resorting to diplomatic action or international judicial proceedings on his behalf, a State is in reality asserting its own right — its right to ensure, in the person of its subjects, respect for the rules of international law.

Decades later the statement came under attack, in the First report on diplomatic protection, presented at a 2000 session of the International Law Commission. Special Rapporteur John R. Dugard characterized the passage as a "judicial blessing" of a legal "fiction," one that inter alia "provided a justification for military intervention or gunboat diplomacy."
(Prior August 30 posts are here, here, and here.)
by Diane Marie Amann at 4:04 AM