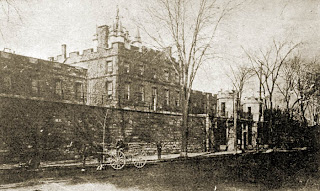 On this day in ...
... 1890 (120 years ago today), at New York's Auburn prison (left), in an "awful spectacle" that the next-day New York Times proclaimed "FAR WORSE THAN HANGING," convicted murderer William Kemmler became the 1st person ever executed by electrocution. (credit for 1901 photo) Two jolts of electricity -- the 1st lasting 17 seconds, the 2d much longer -- were required to complete the grisly event detailed in The Times. The execution took place after the failure of bids to declare the electric chair unconstitutional.