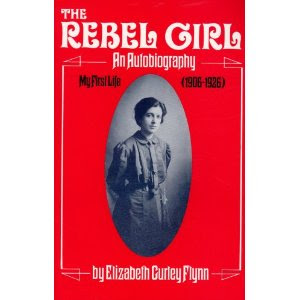 On this day in ...
... 1890 (120 years ago today), a daughter was born in Concord, New Hampshire, to emigrants from Ireland who espoused socialism and feminism. Their daughter, Elizabeth Gurley Flynn (left), would work for both throughout her life. She gave her 1st public speech, "On Women Under Socialism," as a teenager. Her oratory soon got her kicked out of high school, and she became a full-time Industrial Workers of the World organizer. For this group -- whose slogan was "One Big Union," and which was known colloquially as the "Wobblies" -- Flynn, nicknamed "Rebel Girl," organized children, women, and men who worked in industries across the United States. In the wake of World War I she helped found the American Civil Liberties Union; in 1940 the ACLU kicked her off its executive board because she belonged to the Communist Party. That membership also prompted a 9-month trial -- at which she defended herself -- that ended in a Smith Act conviction and a prison sentence served at Alderson federal prison for women. (Among the lawyers who represented Flynn at points in her career was Mary M. Kaufman, previously among the women U.S. prosecutors at Nuremberg.) Having become in 1961 the 1st woman Chair of the U.S. Communist Party, Flynn died in Moscow on September 5, 1964. The Soviet government of Premier Nikita Khrushchev gave her "a full-scale state funeral in Red Square."