On this day in ...
... 1942, the same day that The New York Times published a report that President Franklin D. Roosevelt "continued study" of death-penalty recommendations made by a special military commission he had convened, the United States executed 6 would-be saboteurs by electrocution at a jail in the District of Columbia. They were among 8 men who'd traveled by submarine from their native Germany and landed months earlier on the U.S. coast. During a recess in their July trial, defense attorneys had sought relief from the U.S. Supreme Court, which refused in Ex parte Quirin (1942). Among those executed was one Herbert Hans Haupt, whom the Court presumed held U.S. citizenship -- a presumption that would become significant in the post-9/11 judgment in Hamdi v. Rumsfeld (2004). The Times further reported on this 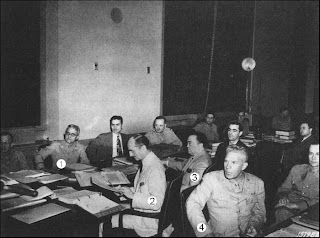 day that Haupt's parents were not notified of their son's death -- for the reason that the parents and 4 other Chicagoans were in jail on suspicion of having helped their son. Also of note: the Library of Congress photo at right, of the "[k]ey figures in the trial of the eight saboteurs," includes at least 2 who'd go on to play key roles at the postwar trials of accused war criminals. They are: No. 2, Francis Biddle, then Attorney General of the United States and and later the American Judge on the International Military Tribunal at Nuremberg; and No. 1, Myron C. Cramer, then a Major General in the Army JAG Corps and assistant prosecutor in this trial, and later the American Judge on the International Military Tribunal for the Far East, which adjudicated the Tokyo Trial.