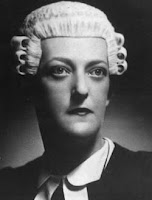 On this day in ...
... 1909, Margaret Battye (left) was born in Subiaco, Australia, into a family of librarians. One of 4 women to receive her law degree from the University of Western Australia in the early 1930s, she was admitted to the bar in 1933. She and another graduate, Mary Hartney, then established the 1st firm of women lawyers in that state. Battye won her 1st case -- and became the 1st woman to represent a client before the bar of that state. Thirty years before any such law would be passed, Battye drafted legislation aimed at ending discrimination against women in Australia. The year was 1949; that same year she died from a thyroid illness, at age 40.