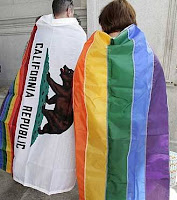 An e-mail just received from my Law Librarian, Erin Murphy, identifies the pith of the trial court judgment against Proposition 8, the voter initiative that made a prohibition on same-sex marriage part of California's Constitution. (Prior IntLawGrrls posts available here.) With a hat tip to Erin, here's the money quote by U.S. District Judge Vaughn R. Walker, Northern District of California:

'Proposition 8 fails to advance any rational basis in singling out gay men and lesbians for denial of a marriage license. Indeed the evidence shows Proposition 8 does nothing more than enshrine in the California constitution the notion that opposite sex couples are superior to same sex couples.'

By those words and many others contained in the 138-page ruling in Perry v. Schwarzenegger, available in pdf here, Walker ruled that the ban on same-sex marriage violates the equal protection and due process guarantees of the U.S. Constitution. (photo credit)
In a curious aside to unsuccessful efforts to have the Perry trial televised -- on which IntLawGrrl Kathleen A. Doty posted -- the court webpage includes not only links to the ruling, but also to YouTube videos of evidence to which the ruling refers.
More litigation sure to follow.
by Diane Marie Amann at 5:50 PM