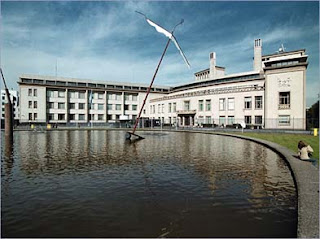 If a tribunal sounds an alarm and no one listens, has it made a sound?
A twist on the "tree falls in a forest" conundrum, the question seem to size up the early-summer state of affairs at the 1st ad hoc international criminal tribunal set up since the Nuremberg era.
The alarm call came in June, in a statement that Judge Patrick Robinson (below left), President of the International Criminal Tribunal for the former Yugoslavia, to the U.N. Security Council.
Robinson's words were dire:

[S]taff are leaving the Tribunal in droves—3 in every 5 days—for greater job security with other institutions, often within the United Nations. I must therefore warn you that this factor ... is impacting adversely upon the expeditious completion of all but one of our trials. And it will worsen.

Robinson blamed the departures on the push to close the Hague-based tribunal (above right) as soon as possible. Staffers sought more permanent work elsewhere. A solution would be to grant some security of employment within the U.N. system, argued Robinson, who served in various positions in Jamaica, the inter-American system, and the U.N. system before joining the ICTY in 1998. (credit for 2009 photo) But Robinson's statement made clear that, to date, his plea had fallen on deaf ears: 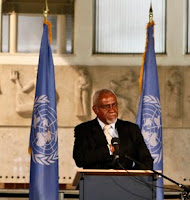 Staff attrition, and the desperate need for urgent action in stemming that flow, is a factor that I have repeatedly stressed to the utmost degree in my previous presentations to the Security Council and the General Assembly. I am quite frankly at a loss as to what more might be done or said on my part to turn your attention to this issue.

Just heard about all this, thanks to a news roundup from our colleagues at the International Criminal Law Bureau.
Further checking showed that Security Council Resolution 1931 (2010), issued on June 29, did extend terms of ICTY judges, as Robinson had urged. With regard to other staffers, the resolution treads rather more lightly. It

One hopes that Robinsons' staffing call truly was heard, and that the search for "practicable solutions" has been productive. Otherwise this aspect of the ICTY completion process will continue to put off completion. As Robinson explained to the Council, fewer workers means less work can get done.
Further hope: that in the future, policymakers will make policies that avoid the occurrence of such an utterly foreseeable ill consequence of winding down.