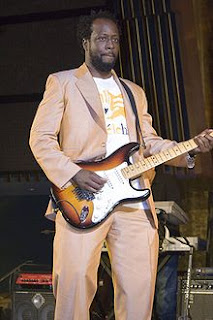 In 2004, Wyclef Jean--the noted Haitian activist, singer and former member of the Fugees-- released a song titled "If I were president," which served as a campaign promise of sorts. Here's a snippet:

If I were president
Instead of spending billions on the war,
I can use that money so I could feed the poor.
Cause I know some so poor,when it rains that's when they shower.
Screaming "Fight the power". That’s when the war should devour.

Jean might just get the chance to discover what he could. Last week, he announced his intention to run for the Haitian presidency (against his own uncle and several others) The incumbent and much maligned Rene Preval cannot run again, thus Haiti will have a new president. Is Wyclef Jean the right man for the job?

The Haitian presidential line is filled with despots and dictators, members of the elite class and former Roman Catholic priests, illiterates, medical doctors, the powerful and the powerless. We haven't yet had a singer. Certainly, Jean's status as a well-known singer should not preclude him from serious contention; if Schwarzenegger with his dubious acting skills can govern the most powerful state in the Union (as a California resident, I might take issue with whether he's actually done a decent job, but that's a point for another day) why not a singer for Haiti? But does Wyclef Jean have what it takes to bring Haiti out of the darkest moment in its 216 year history?

On the one hand, Jean has strong support from the Haitian poor who see him as a local boy made good who never abandoned them. Although he moved to Brooklyn as a teenager, Jean takes great pride in the fact that he never renounced his Haitian citizenship in favor of the more advantageous American one (if he had, the Haitian presidency would be closed to him as Haiti does not recognize dual citizenship). When Jean faced sharp criticism over Yele Haiti, an organization started by Jean to help Haitians, he pulled together a press conference and brandished his passport as both a sword and shield. Surely one who retained his Haitian nationality years after leaving the island could never be guilty of the terrible acts his organization was accused of? Acts such as not paying taxes and spending donors' money on lavish travel and on Jean himself, for example. While I might argue that many who have brandished the Haitian passport before him have done those things and much worse, Jean's tactics seemed to endear him more to the Haitian community at home and abroad--my own family included. Organizational irregularities aside, Jean has strong ties to the Haitian community and has served as Haiti's Minister of Culture and Ambassador at large. Moreover, unlike much of Haiti's elite, Jean's wealth was not created on the backs of Haiti's poor. He doesn't have ties to Haiti's strongly entrenched and regressive ruling class. He is an outsider who presumably could not be so easily co-opted.

On the other hand, Jean has little experience to guide Haiti through this delicate period in its history. Billions of dollars has been pledged in the Haitian rebuilding effort, although much of it has not yet materialized. Will Jean know how to pressure the international community to provide the funds it has promised? Will he put the proper mechanisms in place to police corruption and ensure the funds are well spent? Does he have a viable plan to create a new economy for Haiti? Haiti's administrative capacity was lamentable before the earthquake, now it is simply non-existence. Can Wyclef Jean create a professional cadre of civil servants that can get the functions of the state working again for Haiti's ordinary citizens? Jean gave an interview to Rolling Stone recently where he addressed many of these concerns (see it here).

Even if Wyclef Jean win's the Haitian presidency, all is not done. Haiti's elite has a long history of brutally doing away with leaders they cannot control. But Jean has a song to sing for all of them:

If I was president,
I'd get elected on Friday, assassinated on Saturday,
buried on Sunday. then go back to work on Monday.

by Marjorie Florestal at 2:30 PM