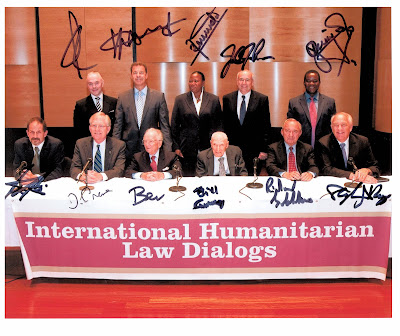 In the spirit of humanity and peace the assembled current and former international prosecutors and their representatives here at the Chautauqua Institution ...
Recognizing the continuing need for justice and the rule of law as the foundation to international security, and cognizant of the legacy of all those who preceded us at Nuremberg and elsewhere:
Recognize the tenth anniversary of the Robert H. Jackson Center and its important mandate to preserve, promote, and advance the legacy of Justice Robert Jackson through education, exhibits, and events, which emphasize the current relevance of Jackson’s ideas on individual freedom and justice;
Honor the life of our colleague and friend Whitney R. Harris, a prosecutor of the International Military Tribunal at Nuremberg who passed away this year; commend his drive and force in ensuring that the spirit of Nuremberg continued; and note the awarding posthumously to Whitney Harris the first annual Joshua Heintz Humanitarian Award for distinguished service to mankind;
Applaud the efforts of the states parties to the Rome Statute, and other delegations in Kampala this year in their willingness to openly take stock in the progress of international criminal law in general and the concrete recommendations to ensure justice for victims of international crimes; and for reaching consensus on a definition of the crime of aggression and for their determination to press for appropriate mechanisms for its enforcement and prosecution;
Noting that after thirty years of impunity the first judgment has been rendered in respect of the crimes of the Khmer Rouge in Cambodia;
Reflecting upon the fifteenth anniversary of the genocide at Srebrenica and the continuing need for the accountability of those responsible;
Expressing concern at the continuing plight of civilians caught up in armed conflict and particularly for those crimes committed against women and children;
Now do call upon the international community to:
Keep the spirit of the Nuremberg Principles alive by:
Ensuring the enforcement of the laws of armed conflict and in particular those relating to the protection of civilians;
Calling upon parties in armed conflict to respect international law applicable to the rights and protection of women and girls;
Ensuring that gender crimes are investigated and prosecuted appropriately;
States refraining from the use or threat of armed force and settling their disputes by peaceful means and in accordance with the United Nations Charter and international law;
Supporting and adequately funding the tribunals and courts in their work to maintain the rule of law at both the international and domestic level;
Implementing their obligations under international law in the sharing of information, investigating, prosecuting or transferring to an appropriate judicial body those who violate international criminal law to ensure accountability of all persons, including sitting heads of state;
Considering the adoption of a Convention on the Suppression and Punishment of Crimes Against Humanity; ...