Much in "U.S. Wary of Example Set by Tribunal Case," a story about Omar Khadr will not be new to our readers, who no doubt will have read IntLawGrrls' many prior posts.
What is noteworthy appears in the lead sentence of this recent New York Times article: 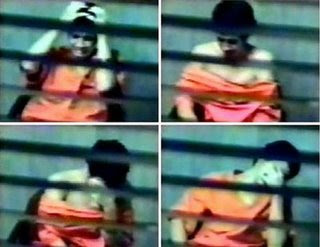 After working for a year to redeem the international reputation of military commissions, Obama administration officials are alarmed by the first case to go to trial under revamped rules: the prosecution of a former child soldier whom an American interrogator implicitly threatened with gang rape.

Khadr was seized in Afghanistan at age 15 and soon shipped to Guantánamo. He's been in U.S. custody more than 8 years -- nearly 1/3 of his life, which began with his birth in Toronto, Canada, to a family that had emigrated from Syria.
The Times article labels him, more than once and without hesitation, a "child soldier."
It's a label that wasn't often seen when initially used on this blog 3-1/2 years ago. The unquestioned use of the term in this Times article marks an important mindset-shift in a mainstream publication that seems yet to have a consistent rule on what deserves the label "torture." It's a shift that owes much not only to judicial decisions like this and this, but also to the release of "Oh, Mommy" interrogation videos (photo credit), to NGO advocacy, to the book Guantanamo's Child (2008), and to principal and amicus litigation.
Time will tell whether and how the shift affects the ultimate fate of this alleged child soldier -- if, that is, his oft-delayed criminal case, set to resume on October 18, ever proceeds to verdict.
by Diane Marie Amann at 6:00 AM

This is a great point! What a relief that the NYTimes can label him a child soldier without hesitation or quotation marks!