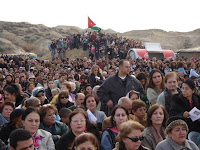 On September 1, the day after President Obama declared an end to the U.S. combat mission in Iraq, a charter flight carrying approximately sixty Iraqis from Western Europe landed in Baghdad -- apparently ending at least one aspect of the protection mission through forcible repatriation. Despite strong condemnation from the UN High Commissioner for Refugees, the United Kingdom sent another planeload of failed Iraqi asylum seekers back to Baghdad the following week. This time, the Iraqis claimed that, when they refused to disembark in Baghdad, they were beaten by UK Border Agency staff and Iraqi police.
Though some of these Iraqis may have legitimate asylum claims that were denied (similar to this story from Sweden), those who do not face a well-founded fear of persecution on one of the five enumerated grounds fall into a protection gap in international refugee law. The UN Refugee Convention does not provide any legal basis under which failed asylum seekers can remain in the host country, even if they would face, as many of these Iraqis did, "serious human rights violations and continuing security incidents." While UNHCR can "strongly urge" governments to do the right thing by providing protection until safe voluntary return is possible, this request sounds in the spirit of the Refugee Convention rather than its text.
Is it time for a new international convention to protect the rights of those at risk of generalized rather than individualized harm (along the lines of the OAU Convention Governing the Specific Aspects of Refugee Problems in Africa)? Many asylum seeker-receiving nations already offer domestic forms of protection (such as the UK's humanitarian protection and the US's temporary protected status) that may apply to those seeking protection from generalized violence. But the domestic nature of these statuses leaves significant discretion in the hands of governments to determine who will receive such protection -- discretion that they may not be willing to part with easily. And in the current political climate, it's hard to imagine that states would be willing to extend international protection to migrants of any sort. In the meantime, UNHCR officials can exhort fair treatment until they're blue in the face, but governments will continue to determine when to end protection of failed asylum seekers without the additional layer of accountability that an international agreement on point might offer.

(credit for photo of Iraqi refugees)