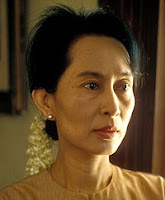 Heard murmurs a while back about the possibility of an international inquiry commission into abuses in Burma, the country also known as Myanmar about which IntLawGrrls frequently have posted.
A statement that Ambassador Eileen Chamberlain Donahoe (below right), the U.S. Representative to the Human Rights Council, made in Geneva Friday (hat tip) confirms that such a possibility is on the table.
Speaking during a "general debate on situations requiring the Council's attention," Donahoe 1st put the issue in context:

In Burma, the human rights situation remains grim. Under the repressive election laws that stifle meaningful competition and with the continued detention of more than 2,100 political prisoners, including Nobel laureate Aung San Suu Kyi, the November 7 elections cannot be inclusive or credible.

(credit for above left photo 1991 Peace Prizewinner Suu Kyi (prior posts)) Donahoe then articulated the aims of the United States regarding the Asian country that's been ruled by a military junta since the late 1980s: 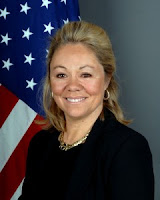 Our overriding objective is to promote a peaceful democratic transition, encourage national reconciliation, and achieve respect for human rights. We urge an end to systematic violations of religious freedom, notably the large-scale repression against the Muslim Rohingya, including refusal to grant citizenship, severe government restrictions on travel, and discrimination in employment and educational opportunities.

Donahoe's comment concluded by referring to a March 2010 report that had recommended "a commission of inquiry with a specific fact finding mandate to address the question of international crimes." Issuing that report was Tomás Ojea Quintana, Special Rapporteur on the situation of human rights in Myanmar. The Council discussed the report at the time it was issued, but took no action. Friday, Donahoe said on behalf of the United States:

Worth noting that Ojea Quintana's report made specific reference to the International Criminal Court. Past such commissions have been deployed in places like the former Yugoslavia and Darfur. The resulting Yugoslavia report, issued by a commission chaired by M. Cherif Bassiouni, and the Darfur report, issued by a commission chaired by Antonio Cassese, both led to international criminal cases. No less an authority than Philip G. Alston, the NYU Law Professor who recently concluded a term as Special Rapporteur on extrajudicial, summary or arbitrary executions, has recommended such commissions as "an appropriate filtering mechanism" in order to "evaluate whether or not a situation warrants referral to the ICC."
Worth watching what happens with this proposal.
by Diane Marie Amann at 6:00 AM