Kampala as cause to celebrate 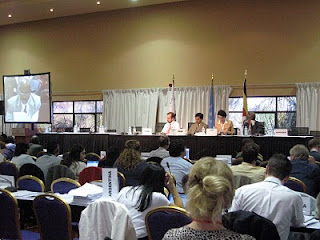 Celebration proved the closing theme of the 4th International Humanitarian Law Dialogs.
The final speaker at the recent upstate New York conference was William A. Schabas, Professor of International Human Rights Law and Director of the Irish Centre for Human Rights at the National University of Ireland-Galway. He asked whether the International Criminal Court Review Conference this summer in Kampala, Uganda (above left; credit), was "a moment of celebration or a disappointment." Schabas then answered his own question:

I think it is a great accomplishment.

The 1998 Rome diplomatic conference, Schabas recalled, had ended with a compromise on the extent of crimes the ICC may hear. Immediately operative were 3 core international offenses: genocide, crimes against humanity, and war crimes. Left for another day was a 4th: the offense of offensive warmaking, called crimes against peace in the Nuremberg era and known today as the crime of aggression. Article 5 of the Rome Statute grants the ICC jurisdiction over aggression, but postpones actual prosecution until adoption of a provision "defining the crime and setting out the conditions under which the Court shall exercise jurisdiction with respect to this crime." 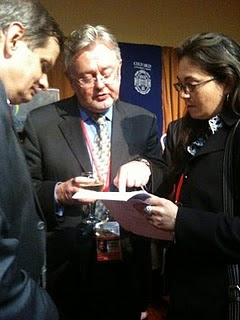 Negotiators worked on both definition and conditions for the next dozen years before the Assembly of States Parties adopted a package of proposed amendments, designed to give the ICC power to adjudicate allegations of aggression, at Kampala.
"At Kampala, it was not obvious even till the final minutes of the conference that it was going to succeed," said Schabas. "These were adopted in the final minutes of the conference, by consensus. If somebody had called for a vote, the votes probably weren’t there." (credit for photo from Schabas' Kampala blog, depicting him, center, "discussing the amendments to article 8 with the Bulgarian delegation")
The central achievement was the definition of aggression in proposed Article 8 bis. "It will not be immune to judicial interpretation," Schabas said, and predicted "a liberal approach to its application."
Strong supporters of criminal punishment for aggression have expressed concerns that the Kampala package affords too many ways to avoid implication in that crime. (For details on the intricacies of these amendments, see our crime of aggression series.)
Agression, Schabas allowed, "may never be prosecuted, which may not necessarily be a bad thing. It simply confirms a deterrent effect."
Schabas sought to allay concerns about obstacles to entry into force, including a requirement of ratification by 30 states and further review in 2017. "I don’t think they’re actually going to be very difficult – not anywhere near as difficult as the obstacles appeared in 1998, of getting the 60 ratifications." (This latter milepost was reached in April 2002, so that the Rome Statute entered into force fewer than 4 years after its adoption. Today 113 of the United Nations’ 192 member states belong to the ICC. Nonparties include China, India, Russia, Turkey, and, as discussed in yesterday’s post, the United States.)
Nor, in Schabas' opinion, does it seem likely that political leaders of states parties will exercise the possibility of opting out of exposure to ICC pursuit should they be accused of aggression.
Endorsing a prediction that, as posted, ICC Judge Hans-Peter Kaul made earlier in the Dialogs, Schabas said:

I think that within 6 years, 4 months, and a few days we will have a court with jurisdiction over aggression, capable of prosecuting the crime.

This is an important step for international criminal justice, Schabas maintained, along a trail blazed by Robert H. Jackson, Chief U.S. Prosecutor at the Trial of the Major War Criminals held in Nuremberg after the Allies defeated Nazi Germany:

Jackson saw the link between war and other crimes, that war is at the center of it, that war is responsible for it. To the extent that the adoption of that amendment revives this, that is good.

On the trail that Jackson blazed lies the question of state responsibility. According to Schabas, it’s a question that was entertained in the proposal of U.S. President George H.W. Bush and British Prime Minister Margaret Thatcher, following Iraq’s invasion of Kuwait, to set up a tribunal competent to hear charges of aggression. But that proposal never was implemented, and the question of state responsibility was not addressed by the international criminal fora that were set up after Cold War.
Why might some be less eager today to prosecutor perpetrators of aggression?
Schabas proffered 2 possible answers:
► 1st: "We have become a be more militarized than we should be." As posted yesterday, in an earlier Dialogs speech Stephen J. Rapp, U.S. Ambassador-at-Large for War Crimes Issues, had stressed, as a reason for caution in implementing the current Kampala aggression amendments as they now stand, that military intervention is at times necessary. Schabas replied:

Sometimes, yes. But nor would I exaggerate the importance of that, because war brings atrocities, inevitably.

►2d: Some civil society organizations seemed not to appreciate the significance of making aggression a crime punishable by the ICC. Schabas recalled: "I saw a banner that said, ‘Civil Society Welcomes Stocktaking,’" another aspect of the Kampala Conference. "Civil society should have welcomed the amendment on aggression."
Echoing Judge Kaul’s description of atrocities as the "excrement" of war, Schabas said of the

crime-of-aggression package: "That’s the big piece. It shows that," despite some growing pains at the ICC, "we have a court that is healthy and productive and moving forward."