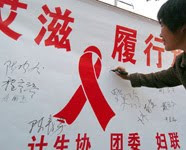 On Tuesday, China took the first step towards meaningful enforcement of anti-discrimination laws designed to protect those living with HIV/AIDS when a court in the Anhui Provence accepted a case brought by an HIV positive man claiming he was illegally denied a job on the basis of his HIV status. (photo credit, left) The plaintiff, an unidentified man in his early 20s, claims that he passed a written test and interviews for a teaching job, but that he was ultimately rejected for the position after a physical exam revealed he was HIV positive. His suit is based on a March 2006 State Council regulation that prohibits institutional or individual discrimination based on HIV status. Since 2006, Yirenping, a civil rights advocacy group, has brought 15 similar lawsuits, all of which have been declined by the courts. Zheng Jineng, the attorney for the plaintiff in this case, says:

In the past on sensitive cases like this, the court would be very reluctant to accept the case. But this time they accepted it smoothly and quickly. That means the legal system in China is making progress.

Indeed this is a good sign. However, it is a small step against a ghastly background of persecution of people living with HIV/AIDS and activists in China. In July of this year, Joe Amon, Program Director for Health and Human Rights Division at Human Rights Watch, wrote:

On paper, the Chinese government has laws and policies that are protective of the rights of an estimated 700,000 people living with HIV in the country. In practice, these policies are frequently undermined by the actions of police and public security forces, who round up "undesirables" such as sex workers and drug users and intimidate and censor civil society organizations

The Chinese court's decision to hear the case at hand comes after its participation in the 2010 International Aids Conference in Vienna, which explored the theme "Rights here, right now." There, Michel Kazatchkine, executive director of the Global Fund to Fight AIDS, Tuberculosis and Malaria, joined a number of international organizations and NGOs in calling for the closure of compulsory drug detention facilities.

Drug users are detained in such facilities for up to six years and subjected to forced labor and other inhumane conditions. However, Kazatchinke decided that despite the clear human rights problem the detention facilities present, the Global Fund will continue to provide support to these facilities so that detainees will have access to condoms, clean injecting equipment, and antiretroviral treatment. (photo credit, left).
He was not kidding when he called this choice an "ethical dilemma." It will be difficult to make progress when rule of law efforts collide with internationally-funded and highly questionable HIV policy in China. While those in detention should not be denied care for lack of funding, serious international pressure is needed to close the detention camps. And while China appears to be making some progress in this area, going forward, efforts should be made to strengthen civil society groups that call China to enforce its anti-discrimination laws.