(My thanks to IntLawGrrls for the opportunity to contribute this Look On! guest post about my film, War Don Don)

In the summer of 2006 I sat behind bulletproof glass in Freetown, in the observer gallery of the Special Court for Sierra Leone, an international war crimes "hybrid tribunal," created jointly by the United Nations and the government of Sierra Leone. At the time I was working not as a filmmaker, but as a law student and legal intern for a defense team. I was assigned to work on the case of Alex Tamba Brima, among three members of the rebel Armed Forces Revolutionary Council charged with crimes against humanity and war crimes stemming from the 1990s civil war in that West African country. 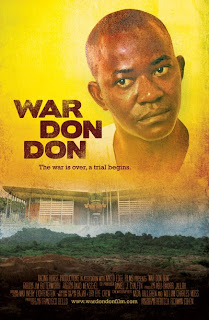 Yet I found myself drawn to observe the trial of the leader of a different warring faction.
From my seat in the gallery of the trial involving members of the Revolutionary United Front, I first observed Issa Sesay, a former rebel leader accused of crimes against humanity and a key player in the peace negotiations – and I was fascinated by the range of roles that one man could assume amidst the intensity of such a brutal conflict. I also came to know lawyers on both the prosecution (including prosecuted by Stephen J. Rapp, who since has become the U.S. Ambassador-at-Large for War Crimes Issues) and the defense. They were some of the brightest and most passionate advocates I have ever met.
I became convinced that the story of Sesay's trial needed to reach a larger audience. Combining my legal experience in criminal defense with my background as a filmmaker, I realized that a documentary film could communicate the complexities of Sesay's rise and fall from power – and its implications for a country still reeling from the horrors of civil war.
The result is War Don Don, an 86-minute film that has won awards at festivals and that, as detailed in the post above, will air this this week on HBO2. War Don Don tells the story of Sesay (depicted in the poster above right), whom prosecutors said is a war criminal, guilty of heinous crimes against humanity, and whom defenders said was a reluctant fighter who protected civilians and played a crucial role in bringing peace to Sierra Leone. (poster credit) The film puts international justice on trial, and finds that in some cases the past is not just painful, it is also opaque.
During the process of editing, we frequently made reference to Akira Kurosawa's Rashomon (1950); that is, to the ideas that
► Film (and trials) can put multiple narratives in tension;
► Truth can be unsettled;
► Perception influences memory; and
► Historical fact may be hard to prove, particularly in a trial.
On that note, we were also inspired by Andrew Jarecki's film Capturing the Friedmans (2003), which reminded that the idea that truth can be elusive, that people can play many different roles in the same story, and that no human being can be entirely defined by the horrible things that he or she may have done.
I knew we were done editing when different people took away different things from the film, when the film acted like a Rorschach test of sorts. Different audiences will come to their own conclusions – one of the greatest joys of documentary filmmaking is the debate that arises from having to sort through the tensions within and between conflicting stories.
I hope audiences enjoy having some of their assumptions tested and coming to examine their own reactions to controversial issues.

by Rebecca Richman Cohen at 4:59 AM