The Don't Ask, Don't Tell Act infringes the fundamental rights of United States servicemembers in many ways, some described above. The Act denies homosexuals serving in the Armed Forces the right to enjoy "intimate conduct" in their personal relationships. The Act denies 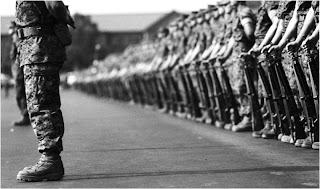 them the right to speak about their loved ones while serving their country in uniform; it punishes them with discharge for writing a personal letter, in a foreign language, to a person of the same sex with whom they shared an intimate relationship before entering military service; it discharges them for including information in a personal communication from which an unauthorized reader might discern their homosexuality. In order to justify the encroachment on these rights, Defendants faced the burden at trial of showing the Don't Ask, Don't Tell Act was necessary to significantly further the Government's important interests in military readiness and unit cohesion. Defendants failed to meet that burden. Thus, Plaintiff, on behalf of its members, is entitled to judgment in its favor ... for violation of the substantive due process rights guaranteed under the Fifth Amendment.

-- U.S. District Judge Virginia A. Phillips of the Central of District California,

based in Riverside, in the 86-page opinion issued yesterday in Log Cabin Republicans v. United States, in which she ruled that the government's "Don't Ask Don't Tell" law violates the U.S. Constitution. Having so ruled on 5th Amendment due process grounds, Judge Phillips then proceeded to rule that the law, found at 10 U.S.C. § 654, which has been applied to lesbians and gays in the military since 1993, also violates the free speech and petition rights of the 1st amendment.
by Diane Marie Amann at 2:00 AM