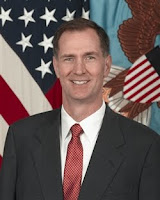 -- Dr. James N. "Jim" Miller (right), Principal Deputy Undersecretary of Defense for Policy, quoted in Politico yesterday by Laura Rozen (to whose foreign policy blog we link in our "connections" column at right). Miller was speaking of the Obama Administration's hopes for U.S. ratification of New START, the nuclear weapons treaty that, as we've posted here and here, U.S. President Barack Obama and Russian President Dmitry Medvedev signed last April in Prague, Czech Republic. As Rozen reported, the Foreign Relations Committee of the U.S. Senate is supposed to vote today on the treaty. If the Committee approves, the treaty then will be sent to the full Senate. Miller made clear that the administration would like to see this happen sooner rather than later, even as he allowed:

'But we understand that the Senate has to act according to its own timeline and have its own questions answered and we remain committed to provide those answers as they continue their deliberations.'