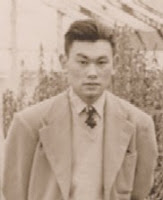 On this day in ...
... 1942, what The New York Times called "the first specific ruling on the constitutionality of actions" taken by the U.S. government in order to effect the "evacuation of Japanese on the Pacific Coast," a federal trial judge sustained the Army's efforts to hold "all American-born Japanese as well as Japanese nationals" in what was called "protective custody." Judge Martin I. Welsh issued the oral ruling in his court in Sacramento, in a challenge brought by a man whom the Times identified as "Fred T. Morematsu." The actual surname of the young U.S.-born man at left was, of course, Korematsu (photo credit) -- and his case would go on to set an oft-criticized 1944 Supreme Court precedent.