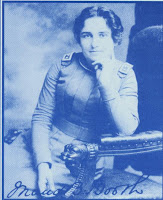 On this day in ...
... 1865 (145 years ago today), a daughter, Maud, was born into an Anglican clerical family in England. Active on social welfare issues, as a teenager she helped organized a branch of the Salvation Army in Paris, France. Efforts to do the same in Switzerland met with imprisonment before success. Known as the "Little Mother of the Prisons," Maud performed social work in London's slums and campaigned for prison reform. Maud Ballington Booth (right) and her husband, a son of the Salvation Army's founder, attained U.S. citizenship and established the Volunteers of America. (photo credit) She died on August 26, 1948, in New York.