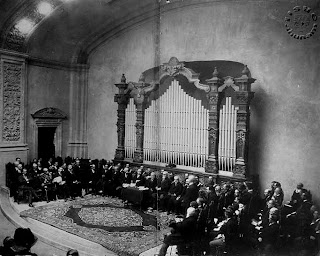 On this day in ...
... 1910 (100 years ago today), Mexico's President, Porfirio Díaz, presided over the ceremony that marked the opening of the Universidad Nacional de México at Simón Bolívar Ampitheater, Mexico City (right). The event was part of the festivities that commemorated the 100th anniversary of the Mexico's independence. This public institution is among the Americas' largest universities, with more than 300,000 students last academic year. Among its many prominent alums are 2 women authors, Elena Poniatowska and Audre Lord. (photo credit)