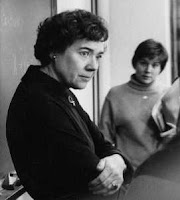 On this day in ...
... 1980 (30 years ago today), Dr. Alona Evans (far left) died suddenly, 63 years after her birth in Providence, Rhode Island. At the time of her death she was several months into her term as the 1st woman President of the American Society of International Law. (photo credit) Earlier, she had become the 1st woman elected to the Board of Editors of the American Journal of International Law. Evans, who'd earned her bachelor's and doctoral degrees from Duke University, served at the U.S. State Department during World War II, and then became Professor, and eventually Chair, of the Political Science Department at Wellesley College in Massachusetts. She "was an expert on international criminal law, extradition, aircraft hijacking, and refugee issues," having co-chaired a State Department-funded study on terrorism. In the 1970s, she'd led "an ad hoc ASIL committee on the professional interest and status of women in international law." In the 1950s Evans was a visiting law professor at Harvard, "prior to that institution's granting a law degree to women." Outstanding teams in the Jessup international moot court competition receive an award bearing her name.