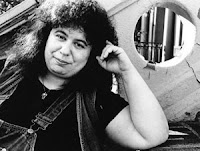 On this day in ...
... 1946, Andrea Dworkin (left) was born in Camden, New Jersey. Some time after earning a bachelor's degree in literature in 1968 from Bennington College, she moved to Europe and "married a Dutch political radical." (photo credit) The couple divorced within 3 years; Dworkin later told The New York Times:

'I was a battered wife, and pornography entered into it. Both of us read it, and it helped give me the wrong idea of what a woman was supposed to be for a man.'

Dworkin became a "feminist writer and antipornography campaigner," cowriting with Catharine A. MacKinnon an antipornography ordinance that would be invalidated on 1st Amendment grounds. Among Dworkin's books were Woman Hating (1974), Pornography: Men Possessing Women (1981), Intercourse (1987), and Heartbreak: The Political Memoir of a Feminist Militant (2002). Dworkin died in her sleep, at age 58, in 2005.