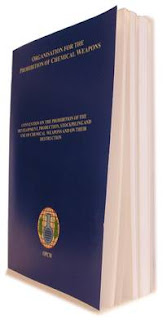 On this day in ...
... 1992, meeting at Geneva, Switzerland, the multilateral Conference on Disarmament adopted a draft text for the Convention on the Prohibition of the Development, Production, Stockpiling and Use of Chemical Weapons and on their Destruction, which then was transmitted in the Conference Report to the U.N. General Assembly. The adoption culminated efforts dating at least to 1968, when Sweden placed discussion of chemical weapons curtailment on the active agenda of a conference then known as the 18 Nations Disarmament Committee, chaired jointly by the United States and the Soviet Union. The chemical weapons treaty would enter into force on April 26,1997. As of May 2009 it had 188 states parties, including the United States.