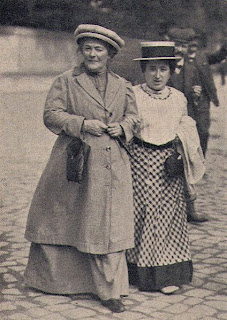 ... 1915 (95 years ago today), as trench warfare dragged on across Europe, about 40 delegates from 11 countries opened a 6-day meeting, known as the Zimmerwald Conference in recognition of the Swiss municipality where it was held. Among those attending this 1st First International Socialist Conference were the exiled Russians Vladimir Lenin and Leon Trotsky. The meeting would end on September 11 with a manifesto that demanded an immediate end to World War I:

[W]orkers within each country should try by any means necessary to convert the current capitalist struggle into a more enlightened one: an international workers’ revolution or civil war 'between the classes' that would spread throughout Europe, and eventually the world.

It further praised certain comrades, among them Rosa Luxemburg (above, near left), Clara Zetkin (far left), and Louise Saumoneau. (credit for 1911 photo)