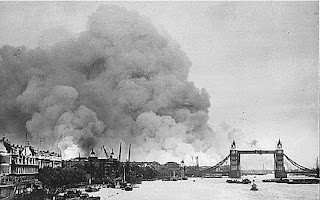 On this day in ...
... 1940 (70 years ago today), hundreds of civilians died and many more were injured when Nazi Germany "unleashed a wave of heavy bombing raids on London," England. (photo credit) The New York Times' James B. Reston wrote:

Until a few day ago it was generally believed here that as the days became shorter German raids on the country in general and London in particular would decrease, but the way it looks now, the Nazis are concentrating on trying to destroy airports during the day and factories at night.

The aerial bombardment known as the London Blitz would last through fall and winter, till the following May, killing about 43,000 civilians, injuring 140,000 more, and damaging more than 1 million homes.
(Prior September 7 posts are here, here, and here.)
by Diane Marie Amann at 4:04 AM