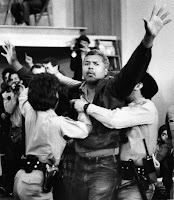 On this day in ...
... 1985 (25 years ago today), via Executive Order 12532, entitled "Prohibiting Trade and Certain Other Transactions Involving South Africa," U.S. President Ronald Reagan announced that the United States was "adopting for the first time a set of modest punitive steps to press South Africa to renounce apartheid," The New York Times reported. The report underscored the acknowledgment of the Reagan Administration that the announcement constituted a "significantly altering" of Reagan's "often-stated policy of ''constructive engagement,'" advocated since Reagan's 1st election 5 years earlier, "to a new approach he called 'active constructive engagement.'" Behind the shift was a desire "to avoid foreign policy disarray abroad and political humiliation at home," according to The Times. The latter explicitly referred to Congress' apparent readiness to adopt harsher sanctions, a desire likely spurred by anti-apartheid protests, like that depicted above right, in the United States. (credit for 1985 photo)