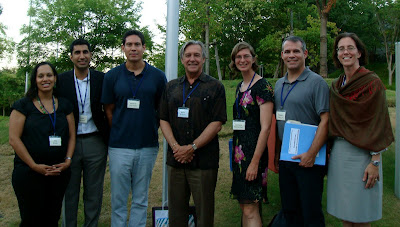 (Delighted to welcome back alumna Anna Spain, who contributes this guest post)

Scholars from around the world recently gathered in Awaji, Japan, for the Third Four Societies Conference.
Hosting the end-of-August event was the Japanese Society of International Law. Along with the Australia and New Zealand Society of International Law, the Canadian Council on International Law, and the American Society of International Law, JSIL has participated in Four Societies since the conference was established in 2006, in order to foster a scholarly network of international law scholars that is truly global in its perspective. (IntLawGrrls posted on the second conference here.)
Nisuke Ando, Professor Emeritus of International Law at Kyoto University and Director of the Kyoto Human Rights Research Institute, delivered the keynote address, in which he framed the central theme of the conference: “International Law in the New Era of Globalization.” In his remarks, Ando defined globalization not as an emerging trend but as an ongoing process that cannot be constrained within a particular point of time. He challenged participants to consider whether international law in an era of globalization intends to promote benefits that are shared by all.
The conference’s seventeen participants -- approximately half of whom were women -- were selected to present scholarly works (papers available here) by their respective societies.
► Mika Hayashi, Yoshihisa Hayakawa, Yoshiyuki Lee-Iwamoto, and Tomonori Mizushima represented JSIL.
► Sarah McCosker, Christopher Michaelsen, Karen Scott, and Philippa Webb represented ANZSIL.
► Ljiljana Biuković, Charles-Emmanuel Côté, Robin Hansen, and Dwight Newman represented CCIL.
► ASIL selected the following people to attend on its behalf, pictured above from left to right:
yours truly, Anna Spain, Associate Professor at University of Colorado Law School; co-presenters Rahim Moloo, General Counsel at University of Central Asia, and Justin M. Jacinto, Associate at White & Case LLP, standing next to ASIL President David D. Caron; Anastasia Telesetksy, Associate Professor at University of Idaho Law School; and Michael J. Kelly, Professor at Creighton University Law School, standing next to ASIL Executive Director Elizabeth Andersen.
While scholars wrote on different subjects in the areas of the environment, globalization, human rights, humanitarian law, international dispute settlement, investment and trade, several central themes emerged:
► What is the role of sovereignty in today’s world?
► How should we understand fragmentation, integration and harmonization?
► Should international law prioritize the collective interests of the international community?
► Is it time to democratize international law and increase the status of non-state actors?
After two days of presentations and commentary from the participants, the conference concluded with remarks by leaders of the four societies, including ASIL President Caron.

The participating scholars plan to publish their works as a collection in an edited volume.
The Fourth Four Societies Conference will be hosted by ASIL, under the leadership of Caron and Andersen, in 2012.
by Anna Spain at 4:08 AM