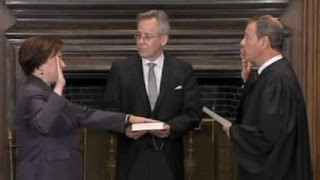 In the hearing that led to her installation as an Associate Justice of the U.S. Supreme Court, Elena Kagan (at left) took issue with the remarks of Chief Justice John G. Roberts Jr. (at right), who said during his own confirmation hearing:

'Judges are like umpires. Umpires don’t make the rules; they apply them. The role of an umpire and a judge is critical. They make sure everybody plays by the rules. But it is a limited role.'

Kagan criticized Roberts' umpire metaphor on the ground that it

'might suggest to some people that law is a kind of robotic enterprise. That there’s a kind of automatic quality to it. That it’s easy. That we just sort of stand there, and we go “ball” and “strike” and everything is clear cut, and there’s no judgment in the process. And I do think that that’s not right, and that it’s especially not right at the Supreme Court level, where the hardest cases go.' 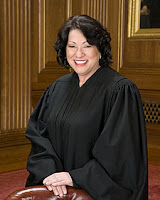 Justice Sonia Sotomayor (left) also rejected the analogy in her confirmation hearing last year.
Legal commentators have noted the provenance of the umpire analogy -- mostly, one dismissed by courts as inappropriate. For example:
► In State v. Crittenden, La. Ann. 448 (1886), reviewing an appeal of a criminal conviction, Louisiana Supreme Court Justice Hicks wrote that "[a] trial is not a mere [game] between counsel, in which the judge sits merely as an umpire to decide disputes which may arise between them."
► In 1910, the Ohio Court of Common Pleas declared that "[a] judge presiding at the trial of a jury case is not a mere umpire of a game of ball, to call balls and strikes." Morrison & Snodgrass Co. v. Hazen, 22 Ohio Dec. 772.
Indeed, when judges have invoked the umpire analogy, is has usually been as a model for what trial judges should avoid, not for what Supreme Court Justices should do.
Was now-Justice Kagan perhaps channeling Earl Warren in his younger days?
Nearly 2 decades before he would become Chief Justice of the United States, then-prosecutor Warren (below right) wrote, in "Organized Crime and Unorganized Law Enforcement," California Journal of Development, June 1934, at 18 (h/t Jed Shugerman):

'It has been my observation over a period of years that when a judge assumes the role of a baseball umpire, merely calling balls and strikes, . . . that justice is seldom done in important cases, but that on the other hand, when the judge assumes the responsibility placed on him by law . . . justice is usually accomplished.'

by Rebecca Bratspies at 6:01 AM