The United States & the ICC 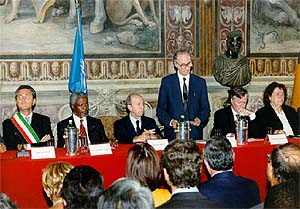 For all the years of its existence, the International Criminal Court has, in effect, shared space with another occupant. Ever present, though sometimes hard to see, has been the United States of America.
The story of the ICC is also a story of U.S. foreign policy. It is a story of the relation between the world’s remaining superpower, a key proponent of the post-World War II International Military Tribunals, and today’s direct descendant of those tribunals, the ICC.
The United States was among a handful of countries to vote against the ICC Statute at the 1998 Rome diplomatic conference (above left). (credit) The United States has kept its distance ever since, sometimes quite hostilely so. Its status as a nonparty state deprived it of any vote at the 2010 Kampala Review Conference and other meetings of the ICC Assembly of States Parties. Yet the importance of the United States to the project of international criminal justice cannot be ignored.
Thus it was at the recent 4th International Humanitarian Law Dialogs at Chautauqua, New York, on "Crimes Against Peace - Aggression in the 21st Century": participants repeatedly turned to talk of the United States.
John L. Washburn, Convener of AMICC, the American NGO Coalition for the ICC, said it well:

For a country as powerful as the United States, the limitation of being a nonparty state is that instead of being the 2,000-pound gorilla, you’re the 1,800-pound gorilla in the room.

U.S. heft left its imprint on the package of crime-of-aggression amendments adopted at Kampala.
A definition forged in the years when U.S. officials had absented themselves from ICC discussions survived with little change, save for the agreement that the offense occurs only when a U.N. Charter violation is "manifest" – an adjective deemed more stringent than others considered. Even more important was the effect that concerns voiced by the United States had on amendments setting forth the paths by which the ICC may investigate and prosecute allegations of aggression.
At Chautauqua, 2 succinct critiques underscored this effect:
► "We came out of Kampala with a consensus," said former Nuremberg Prosecutor Benjamin B. Ferencz, a longstanding supporter of making the crime of aggression punishable in international criminal fora. The consensus, in his view: "Everybody can veto everything."
► Washburn again came quickly to the point. "Any country that’s paying attention can avoid jurisdiction over it for aggression," he said, adding, "I think this was probably the outcome that the United States was hoping for but not sure they could get."
(The negotiations leading to the Kampala package, now open for states’ ratification, are aptly detailed in IntLawGrrl Beth Van Schaack's new paper, on which she recently posted.)
For the official U.S. perspective, Dialogs participants turned to one of their own – former

international prosecutor Stephen J. Rapp (right), since last September the United States’ Ambassador-at-Large for War Crimes Issues. Rapp, whose arrival at the State Department coincided with the return of the United States to ICC negotiations (prior posts here and here), told the Dialogs participants:

While we had been absent from the ICC, we had not been silent in the faces of crimes that shock the conscience.

Rapp cited as proof U.S. support for the Special Court for Sierra Leone (of which he used to be Chief Prosecutor), for the International Criminal Tribunal for the former Yugoslavia, and for other tribunals.
Why the rapprochement?

The reason for our involvement in the ICC is that if there’s to be an answer at the international level for the atrocities that are being committed, tonight, it will not be in the ad hoc tribunals. It will be either at the national level, where of course it’s always best, or in the ICC.

That’s where the butchers will be tried. That’s where Americans need to be supportive, to ensure its success.

(See too this transcript of a post-Kampala press conference featuring Rapp and State Department Legal Adviser Harold Hongju Koh.) Though he deemed U.S. ratification of the ICC treaty "difficult," Rapp said that "at least at this stage we want to make it possible for this institution to succeed."

As IntLawGrrls’ own Valerie Oosterveld explained in her superb year-in-review lecture at the Dialogs (left), since late last year the United States has pursued a policy of positive engagement with the ICC. Although the United States remains a nonparty state, on a case-by-case basis it makes political or diplomatic statements in support of the ICC, considers ICC cooperation requests, shares information with the ICC, and provides the ICC with witness assistance.
Rapp gave to 2 specific examples of this policy in action:
► This spring, Congress enacted the Lord’s Resistance Army Disarmament and Northern Uganda Recovery Act (prior post); and
► Just weeks ago, President Barack Obama criticized Kenya for giving safe passage to Omar al-Bashir, the Sudanese President whom the ICC seeks to arrest on charges of genocide.
► Had Rapp spoken today rather than last week, he might have added yesterday's related news; specifically, the proclamation by Secretary of State Hillary Clinton of a "new American moment" of "global leadership," and the announcement by the United States' U.N. Ambassador, Susan E. Rice, that on September 24 Obama will attend a U.N.-organized summit on Sudan, focusing on Darfur and the impending referendum on South Sudan secession.
And what of the crime-of-aggression amendments adopted at Kampala?
On this, Rapp was rather less fervid.
Rapp described the definition of aggression in proposed Article 8 bis as "one that departed significantly from Nuremberg." He cited an International Herald Tribune op-ed that another Dialogs participant – former international prosecutor Richard J. Goldstone – had written in the runup to Kampala (prior post), and warned that definitional ambiguity could invite confused constructions and could force the ICC on one side or the other of a conflict.
A particular concern, Rapp said, is that worthy military interventions might be subjected to 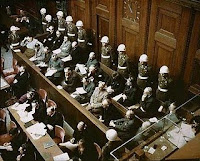 allegations of aggression. Resounding a note that Obama had struck in his Nobel Peace Prize Lecture last year, Rapp spoke of "the debt we owe to people who went into harm’s way and who exercised force." Referring to the Nuremberg trials (right), Rapp added, "The Nazi leaders would never have been in the dock if lives were not lost."
That note stirs many in the world to unease, particularly when it is struck by a country engaged in military intervention, Rapp acknowledged. "That’s a challenge that we in Kampala had to confront," he said, "to deal with the reality in the world while signaling our desire for a world of law, a world where law can eventually displace force."
A number of participants welcomed the United States’ embrace of ICC observer status.
Noting Rapp’s reiteration of the positive-engagement policy in his Chautauqua remarks, Oosterveld, who has served as a member of the Canadian delegation to the ICC Assembly of States Parties, commented,

I felt very heartwarmed about it because I had been there in 2000 when the United States withdrew from the ICC. To hear this from Rapp was a very, very wonderful breakthrough.

Washburn nonetheless expressed concern that as events elsewhere have moved to the fore, on the matter of the ICC "there has been a certain complacency" among U.S. officials since Kampala. He warned against too great a disconnect.
Washburn’s cautionary tale?
Reminder of the dysfunction that impeded relations between the United States and others at the Rome Conference that established the ICC.
(This series on the crime of aggression and the 4th IHL Dialogs, which IntLawGrrls cosponsored, concludes tomorrow with Part 3 (here), a report on the celebratory speech that closed the Dialogs. Part 1 of this series is here.)
by Diane Marie Amann at 6:10 AM