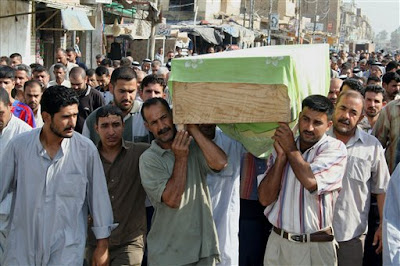 (Occasional sobering thoughts.) This weekend's big news regarding U.S. involvement in armed conflicts is, of course, the release by WikiLeaks of 400,000 pages of Iraq War documents. News outlets such as The New York Times (here) and Le Monde (here) have devoted considerable space to this disclosure, even as other reporters, groups, and private individuals sift through the documents available here.
One disclosure bears particular relevance to this "...and counting..." feature, which we've posted periodically since our founding. An Associated Press story reports that the documents reveal far more U.S. military attention to civilian cases a few years back than was admitted at the time.
Revealed, according to the AP:

[A] higher death toll than previously believed.
Iraq Body Count, a private British-based group that has tracked the number of Iraqi civilians killed since the war started in March 2003, said it had analyzed the information and found 15,000 previously unreported deaths. That would raise its total from as many as 107,369 civilians to more than 122,000 civilians.

The article then quotes Jameel Jaffer (prior post) of the American Civil Liberties Union:

'The American public has a right to know the full human cost of the wars in Afghanistan and Iraq. A lot of this information should have been released to the public a long time ago.'

With these developments in mind, here's our count since our last such post 5 weeks ago:
► The U.S. Department of Defense reports that coalition military casualties in Afghanistan stand at 1,348 Americans, 341 Britons, and 479 other coalition servicemembers. That's an increase of 68, 6, and 16 casualties, respectively, in the last 5 weeks. The total coalition casualty count in the Afghanistan conflict is 2,168 service women and men.
► Respecting the conflict in Iraq, Iraq Body Count reports that between 98,585 and 107,594 Iraqi women, children, and men have died in the conflict in Iraq since the U.S.-led invasion in March 2003. (But see story quoted above.) That represents an increase of between 591 and 640 persons since 5 weeks ago. According to the U.S. Defense Department, 4,426 American

servicemembers have been killed in Iraq, representing 5 servicemember deaths in the last 5 weeks. (As posted, U.S. troops are the only foreign forces remaining in Iraq.)
by Diane Marie Amann at 6:00 AM