Answer to today's puzzler, tucked into our lead story on the underrepresentation of minorities and women among persons invited to speak on Sunday morning talk shows: 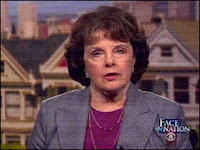 The only woman among the top 10 Congressional repeat guests is Dianne Feinstein (right) of California.
Feinstein shares many characteristics with the others on the list -- and with the vast majority of all guests on these reputedly important television programs, as the study by Alex B. Mitchell, described in the above post, details. (credit for 2008 photo of Feinstein appearing on CBS' "Face the Nation")
Feinstein is a U.S. Senator rather than a Representative. She is white, and she has held office since 1992, well over the 6-year point that Mitchell uses to mark seniority. A few characteristics set her apart, however: she is a Democrat, and a woman.
by Diane Marie Amann at 12:05 AM