The Co-Investigating Judges of the Extraordinary Chambers in the Courts of Cambodia (ECCC) recently filed the Closing Order for Case 002 indicting four defendants for international crimes allegedly committed during the Khmer Rouge era (1975-1979). The four defendants in question, who have been in pre-trial detention since 2007, are the surviving members of the Khmer Rouge Central Committee and/or Standing Committee:
► Ieng Sary (former Deputy Prime Minister for Foreign Affairs) (left),
► Khieu Samphan (former Chair of the State Presidium) (below right),
► Nuon Chea (former Chair of the People’s Representative Assembly and the Khmer Rouge’s chief ideologue) (below left), and
► Ieng Thirith (former Minister of Social Affairs and Ieng Sary’s wife) (below right).
As a result of the Closing Order, which officially ends the formal investigation by the Co-Investigating Judges, the four defendants will be tried for crimes against humanity, grave

breaches of the Geneva Conventions, genocide, and offenses under the 1956 Cambodia Criminal Code. In light of the enormity of the crimes committed by the Khmer Rouge, the Co-Prosecutors in their 2007 Introductory Submission asked the Co-Investigating Judges (“CIJs”) to focus their investigation on specific crimes in specific sectors, including:

The overarching theory of the cases is that the Khmer Rouge used these criminal means to implement its revolutionary project. The Closing Order notes:

Whilst the existence of an ideological project cannot, as such, be considered to be a legal element of crimes against humanity, the implementation of the plan adopted, by criminal means in the case in point by the [Khmer Rouge] authorities demonstrates the widespread and systematic character of the attack.

As we've seen in a number of such cases, the CIJs invoke crimes against humanity as an umbrella charge to cover a range of abuses. The murder and extermination charges stem from purges of Khmer Rouge enemies (such as members of the prior regime) and killings committed at security centers and execution sites. Starting in 1977, the killing of members of the Vietnamese and Cham communities reached a scale so as to qualify as extermination as well as genocide. In addition, the CIJs imply tha

t the charged persons could be convicted for extermination for the high numbers of deaths resulting from the large-scale population movements as well as the conditions of life in the security centers.
Enslavement, imprisonment and torture charges stem mainly from abuses at worksites, cooperatives, and security centers. At these sites, Khmer Rouge staff exercised

total control and all of the powers attaching to the right of ownership over the persons placed there . . . .

The infringements on freedom in the worksites and cooperatives also deemed to constitute imprisonment. Deportation charges concern persons of Vietnamese descent forced to leave Cambodia after the Khmer Rouge came to power.
Evolving patterns of persecution on political grounds (against intellectuals, individuals associated with the prior regime), religious grounds (against members of the Cham community and a 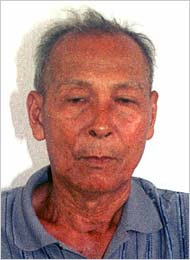 dherents to Buddhism), and racial grounds (against people of Vietnamese descent) involved grave violations of fundamental rights recognized under customary or conventional international law. The charge alleging the commission of other inhumane acts through attacks on human dignity encompasses everything from deprivations of food, shelter, medical care, sanitation etc. during the population movements to the condition of life at worksites. The rape charges stem from the arrangement of forced marriages, which are also charged as other inhumane acts.
The Co-Investigating Judges have already determined the admissibility of over two thousand Civil Party applications (of over four thousand filed). Other applications were rejected primarily because the Civil Parties did not allege acts falling within the situations under investigation, and a number of these are under appeal. The Civil Parties whose applications were deemed admissible include forty-one victims based in the United States who are represented by the Center for Justice & Accountability, a human rights law firm based in San Francisco, led by IntLawGrrl guest/alumna Pamela Merchant, which has heretofore focused on Alien Tort Statute/Torture Victim Protection Act litigation.
There is no question that these defendants were high-level figures within the Khmer Rouge, responsible for launching a radical and ultimately disastrous revolutionary program. Case 002 will determine the extent to which they can be held responsible for the crimes committed in connection with implementing this project

throughout the country given that mid-level cadre may have had considerably discretion in to how to best advance the revolution.
To date, all these defendants have either denied their knowledge of or involvement in abuses by their subordinates or laid responsibility at the feet of their dead compatriots, Pol Pot (“Brother Number One”) (right) or Ta Mok (head of the Revolutionary Army of Kampuchea) (above left).

For a longer discussion of the Closing Order, see my ASIL Insight.