Indépendance cha-cha is the lively name Le Monde has given to the history of French decolonization featured in this multimedia presentation.
With the run of the cursor you can stream through time, clicking to stop when the spirit moves. Examples:
► Listen to the rallying song Débout les Zouaves while reading about World War I (1914-1918), during which French forces included more than 200,000 persons from colonies in sub-Saharan Africa and Madagascar -- more than 25,000 of whom died in the conflict.
► The Colonial Exposition -- and the Counter-Exposition mounted by André Breton and other surrealists -- both held in Paris in 1931.
► Publication of Peau noire, masques blancs (1952) by the Martinique-born psychiatrist and anticolonial theorist Frantz Fanon (depicted not only in a photograph but also via audio of a lecture he gave).
► The securing, in rapid succession in 1960 and 1961, of independence by many former French colonies in Africa; followed by occasional French interventions ever since.

► 2007 accusations of corruption by leaders in certain African countries, about which IntLawGrrls posted. 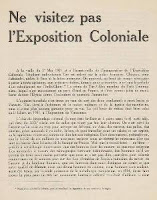 ► Video of a 2007 speech in Senegal by President Nicolas Sarkozy -- that that left "Africans ... seething."
Worth your time to give cha-cha a spin.

Thanks Diane. I missed this and am glad you've posted it--now I have a clear, concise explanation of "françafrique," which, despite President Sarkozy's declarations to the contrary, does not seem to be over and done with yet.