Forced Marriage and the Khmer Rouge

Not without controversy, gender-based violence and sexual violence did not feature prominently in the first trial to go forward before the Extraordinary Chambers in the Courts of Cambodia (ECCC) against Kaing Guek Eav, a.k.a. Duch, the head of S-21 prison. Indeed, the Civil Parties in their closing arguments (see coverage here) decried the fact that the Co-Prosecutors did not place more emphasis on this aspect of violence at S-21 prison in their Introductory Submission to the Co-Investigating Judges.

By contrast, gender-based violence is proving to be more central in Case 002 against the

surviving Khmer Rouge regime leaders, such as Ieng Sary (left). In particular, the Co-Investigating Judges have recently issued their Closing Order indicting the four defendants for sexual violence—viz., the crimes against humanity of rape and other inhumane acts—among other crimes. Most of these allegations stem from the Khmer Rouge’s regulation of marriage, though, rather than from more traditional forms of sexual violence so endemic to situations of armed conflict or repression.

These allegations can be traced to civil party applications in Case 002 that alleged the occurrence of forced marriage and forced sexual relations. On the basis of these applications, the Co-Prosecutors asked the Co-Investigating Judges to expand their initial investigation to explore these allegations. (See here for this procedural history). Over a defense objection, the Co-Investigating Judges complied. Charges based on sexual violence are now contained in the Closing Order, which ends the pre-trial investigation against the four defendants and tees the case up for trial in January 2011. See prior posts on this involvement of the civil parties in shaping the charges before the ECCC here.

outside of marriage were contrary to the collectivist approach of the Khmer Rouge and considered a vestige of the ancient bourgeois regime. The party’s moral code cautioned against taking “liberties with women” and actions “detrimental to women,” and those suspected of immoral behavior were categorized as “bad elements” worthy of purge, reeducation, or even death. The Co-Investigating Judges noted that although rape was nonetheless committed in security centers and cooperatives, there was also evidence in the record of rapes being reported and punished. Based on these facts, the Co-Investigating Judges determined that

the official [Khmer Rouge] policy regarding rape was to prevent its occurrence and to punish the perpetrators. Despite the fact that this policy did not manage to prevent rape, it cannot be considered that rape was one of the crimes used by the [Khmer Rouge] leaders to implement the common purpose. ¶1429.

As such, the current defendants will not be charged with these types of rape.

Rape appears in the Closing Order in other forms, however. In all sectors of the country, the Khmer Rouge forced couples to marry—sometimes in group ceremonies involving 20-60 couples—to ensure that such unions adhered to official

policy and advanced the revolution. For example, only individuals of the same status or standing in terms of party membership could be married. ¶847. Even former monks who had been forcibly disrobed as part of the Khmer Rouge’s effort to eradicate Buddhism from society were not exempt from this policy. ¶842. The Khmer Rouge also adopted a distinctly pronatalist policy with a goal of increasing the population to 20 million within 10-15 years. Bizarrely, many families were also split up as husbands and wives were assigned to different collectives only to be brought back together when the party so dictated, including in some cases for procreation.

Orders regulating marriage apparently came from the highest echelons of the Khmer Rouge, although particular marriages were arranged by local administrative authorities. Army superiors would also choose women from villages for their subordinates, sometimes at random by matching potential mates through drawing numbers from the proverbial hat. ¶848. In these “weddings,” traditional ceremonies were banned; instead, couples vowed to accept each other and work to achieve the objectives of the revolution. Testimony in the record revealed that couples did not dare to resist for fear of punishment at a labor or work camp, reeducation, or even execution. ¶845. Witnesses testified that some individuals committed suicide rather than 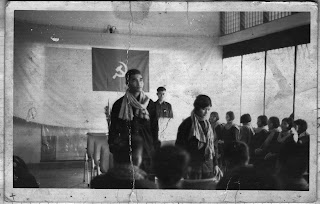 be subjected to such marriages. Women who refused to have intercourse with their new husbands were also subject to punishment, including imprisonment or beatings. ¶ 858. One witness claimed that most couples were satisfied with the match, although those who were not were given ominous-sounding “imagination counseling.” Some relationships were apparently monitored by militia to ensure proper consummation. The Co-Investigating Judges concluded that the

specificity of this process and the evidence that it was applied in different locations demonstrates the existence of a common purpose formulated at the highest level of the [Khmer Rouge] regime. ¶1446.

The Co-Investigating Judges—You Bunleng (Cambodia, above right) and Marcel Lemonde (France, above left)—determined that these forced marriages are chargeable as the crimes against humanity of rape and other inhumane acts. Interestingly, the description of these forced marriages is gender neutral, although it does speak of a “perpetrator committing a physical invasion of a sexual nature against a victim in coercive circumstances in which the consent of the victim is absent.” ¶1431. This implies that one member of the couple is the direct perpetrator and one the victim. In total, 644 civil parties (out of almost 2000) were declared admissible as victims of the policy of the regulation of marriage.

The photograph above shows the wedding of Nun Huy a.k.a. Huy Sre (left) and Prok Khoeun a.k.a. Prak Samuth (right). Huy was born in 1951 and served as head of the Khmer Rouge re-education center at Prey Sar, also known as Office S-24. Prey Sar was part of the central internal security complex, which also included Tuol Sleng Prison (S-21) and the Killing Fields at Choeung Ek. One prison document, dated 23 July 1977, reports the killing of 18 prisoners at S-24 and bears a note saying "also killed 160 children today for a total of 178 enemies killed." Source: Documentation Center of Cambodia, Document No. D1175 and K08273.
by Beth Van Schaack at 6:10 AM